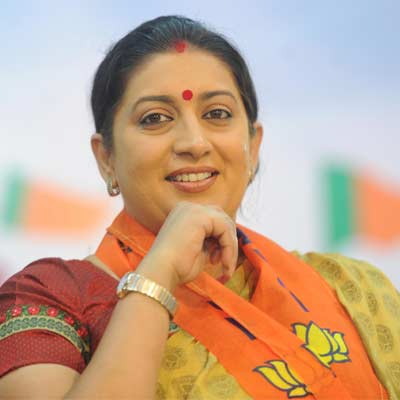 New Delhi, June 24 (IANS) HRD Minister Smriti Irani faced embarrassment on Wednesday after a court took note of a complaint against her for allegedly distorting facts about her educational qualification, prompting the Congress and the AAP to demand her resignation from the cabinet.

The Bharatiya Janata Party (BJP) was taken aback by the development, but it vehemently defended Irani who had contested the Lok Sabha election from Amethi, asserting that the distortions presented before the court flowed out of typographical errors.

Home Minister Rajnath Singh ruled out the resignation of Irani as well as External Affairs Minister Sushma Swaraj and Rajasthan Chief Minister Vasundara Raje over their alleged links to former IPL chief Lalit Modi who is in London while facing charges of financial irregularities in India.

“The arguments made on behalf of the complainant (Ahmer Khan) hold merit,” the court said.

A complaint was filed by Khan in April alleging that Irani, in her three affidavits before the Election Commission (for the Lok Sabha and the Rajya Sabha polls), gave different details about her educational qualification.

He sought action against the minister for allegedly lying on oath.

His lawyer K.K. Manan told the court that Irani declared herself to be a 1996 batch B.A. graduate from Delhi University’s School of Correspondence in her affidavit filed for the 2004 Lok Sabha election.

But in her 2014 Lok Sabha election affidavit, she stated she had done B.Com Part 1 in 1994 from Delhi University (open learning).

In another affidavit of July 11, 2011 for the Rajya Sabha election, she said her highest educational qualification was B. Com part I from Delhi University’s School of Correspondence.

“It is evident from the contents of the affidavits filed by Irani that at best only one of the depositions by her on oath in respect of her educational qualifications is correct,” said the counsel.

The petition claimed that Irani also lied on oath about her assets and it sought action against her under the Representation of the People Act.

“Irani has no moral or constitutional or legal right to continue in her post even for a day. Either she should resign or she should be sacked by the prime minister.

“It is apparent the country’s education minister is lying about her own education. What will happen to the future of millions and millions of the children of this country?” Surjewala asked.

“It is most unfortunate that the degrees of both the education ministers are under question,” he said, referring to allegations against Minister of State for HRD Ram Shankar Katheria.

“Delhi Police took quick action against Tomar. Similarly they should also arrest Smriti Irani,” Ashutosh said. “Her case is very similar to that of Tomar.”

Referring to the manner Tomar was arrested, the AAP asked Delhi Police to “show similar urgency in Smriti Irani’s case as well”.

BJP’s Sambit Patra defended Irani and said she had filed no false affidavit.