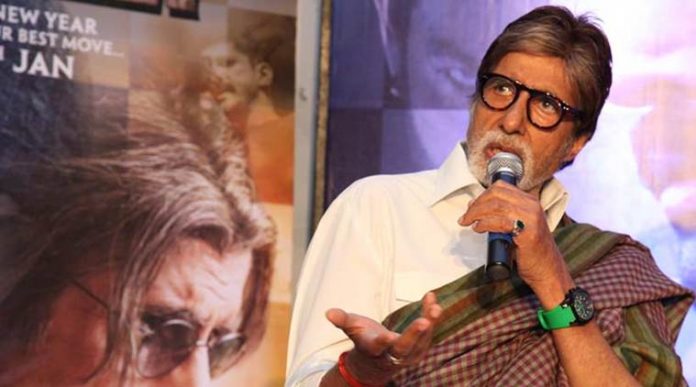 New Delhi, Jan 5 (IANS) For years, fans have thronged the gate of his Mumbai bungalow every Sunday morning. He has the maximum followers on Twitter for an Indian, and has a burgeoning “extended family” of those who read his blog. Bollywood megastar Amitabh Bachchan who, at 73, attracts fans galore wherever he goes, says they are an “essential” part of an actor’s career.

The actor, who has spent over four decades in the film industry, often shares instances of how his fans end up getting either amused or startled if he’s travelling in the same airplane as them; or of the exhilaration that they experience upon clicking selfies with him; and more.

But Amitabh, a globally popular face from Bollywood and one who has admirers across the world, brushes it off as just a result of ‘celebrity’ status.

“I think this would happen to any one that has claims to being a celebrity. There is nothing wrong in it or objectionable. Fan interest is essential for an actor. They make us who we are. Giving them attention or getting it from them is justifiable,” Amitabh told IANS in an email interview.

That has been an ongoing phenomenon throughout his career.

It’s interesting how the actor has been experimenting with his driving skills — whether it’s riding a bicycle for “Piku”, a scooter for “Te3n” or even a ‘tuk-tuk’ for leisure. But he says the best drive for him has been his 45-year-long journey in showbiz.

Asked to share his best driving memory, the three-time National Award winner, said: “Driving memories? 45 years in the film industry has been a wonderful drive!”

And why not? Best known for his roles in films like “Anand”, “Agneepath”, “Namak Haraam”, “Don”, “Hum”, “Zanjeer”, “Black” and “Paa” to name a few, Amitabh has regaled Hindi film buffs as much with his ‘angry young man’ avatar as in romantic avatars; as much as in intensely dramaticl roles, as those with a comical streak.

From essaying a 12-year-old boy Auro in “Paa”; a friendly ghost in “Bhoothnath Returns”; a failed actor and drunkard in “Shamitabh”; and a grumpy father in “Piku” – these are a few of his recent portrayals on the silver screen that have been a window to Amitabh’s talent, which has not faded, but only enhanced with age.

“At my age, this is the best that can come my way and one should be thankful and grateful that there is work available at this time of my career,” said the son of late poet Harivansh Rai Bachchan and Teji Bachchan.

The experience of facing the camera, he says, has not changed.

“Every day is an experience for me. Filmmaking has only one gospel – the sound of ‘Start sound’, ‘camera’, ‘clap’, ‘action’… And you better get it right after hearing those words,” he said.

Adding more versatility to his filmography comes “Wazir”, which features Amitabh as a paralysed chess grandmaster, confined to a wheelchair.

He said the wheelchair made matters “a lot easier”.

“I did not have to worry where to keep my hands… Hehe.. But seriously, though it was great to be able to portray a character I had never done before,” said Amitabh, who said the preparations for the role weren’t too many.

It’s a project that Amitabh readily said “yes” to, especially since it was an idea that filmmaker Vidhu Vinod Chopra — whom he describes as an “astute producer” — had narrated to him around 15 years ago and he had liked it.

Now that the film is ready to hit theatres on Friday, Amitabh describes it as a “smart and modern film, unique in its structure and presentation”.

“And, yes, this one has been made most sensitively as well. It’s intelligent and swift-paced,” added the actor, who has also sung a track titled “Atrangi yaari” along with co-star Farhan Akhtar for the Bejoy Nambiar directorial.