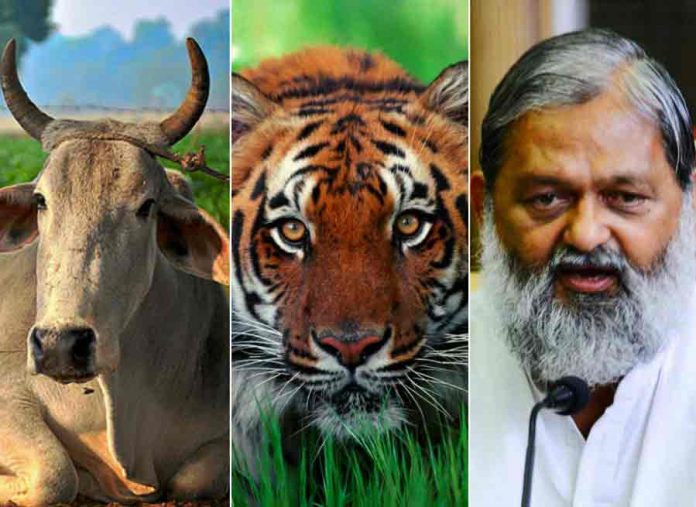 Chandigarh, Oct 7 (IANS) A senior minister in Haryana has taken on the Royal Bengal Tiger – literally.

The minister, who is from the BJP, has demanded that the cow should be declared as the national animal, displacing the tiger.

A tweet from Haryana Health and Sports Minister Anil Vij on Wednesday read: “Declare Cow as National Animal of India instead of Royal Bengal tiger.”

The minister’s tweet has come bang in the middle of a raging controversy over cow slaughter, beef ban in various states and the killing of a Muslim man in Dadri area of western Uttar Pradesh last week over allegations that he had eaten beef.

Vij is a senior minister in the first Bharatiya Janata Party government in Haryana, which came to power in October last year after assembly polls.

In March this year, the BJP government announced a complete ban on sale of beef in any form in the state. The decision upset many people living in Gurgaon, adjoining the national capital, especially a large number of foreign nationals living in the industrial hub, as beef eating has become illegal in the state.

Vij is the most active of all Haryana ministers and quite popular with his action-oriented style of functioning and speaking out openly what is on his mind.

In another tweet last week, Vij, whose health department is grappling with rising dengue cases in the state, said: “Excuse me friends, please don’t invite me for public functions. I want to devote my maximum time for the improvement of my departments.”

The minister is well-known for his no-holds barred comments on the Twitter and otherwise, including on his own government and colleagues.

In the last few months, he has even left his own government and Chief Minister Manohar Lal Khattar embarrassed with his comments.

He took the Twitter route in July to express his displeasure over the Khattar government bypassing him and appointing actress Parineeti Chopra as brand ambassador for a campaign.

“I do not have any information of anybody appointed Brand Ambassador of my department for Beti Bachao programme – Anil Vij Health Minister,” Vij tweeted.

The Khattar government had announced Parineeti’s name for the campaign. Parineeti belongs to and grew up in Ambala city, the hometown of Vij.

In an earlier tweet in February this year, Vij said: “Thank You Chief Minister For Taking Keen Interest into My Departments. I am Relaxed.”

Vij was clearly upset at Chief Minister Khattar showing “interest” in departments handled by him.

The minister’s surprise visits at government hospitals and clinics in recent months have put the health department on its toes. He has “raided” other offices, including police stations, too.

A veteran and well-known BJP leader who represents the Ambala assembly constituency, Vij was one of the top contenders for the chief minister’s post in October last year when the BJP came to power on its own in Haryana for the first time.

In another tweet later, he said: “There are many obstacles in politics in every step. I have not named anyone (regarding stopping him from doing his work). I had just expressed my resolve to work to mark the 100 days of the (Khattar) government. I will crush all such obstacles and move on.”