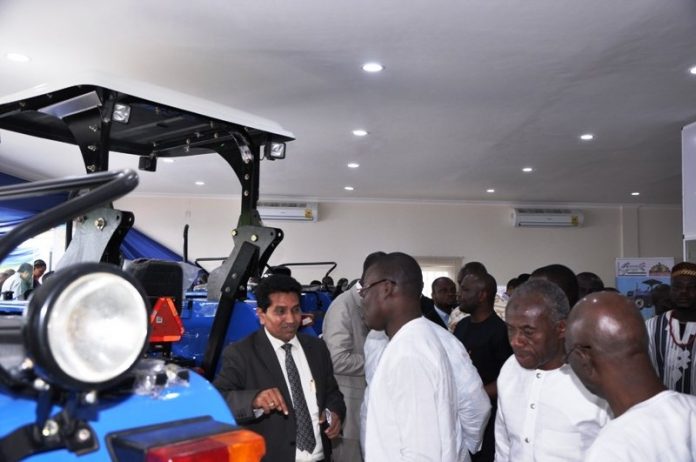 The company is already selling India-made Sonalika tractors and farming machines, and is now planning to build agriculture service, as well as training, centres, in farming communities across the country.

Patel told IANS that the company will also train the youth both in Ghana and the West African region on how to generate opportunities in various fields of technology and services for farmers.

He said the service centres were being established to help “guarantee the lifespan of tractors and also reduce the long distances farmers have to travel to seek spare parts and technical supports in some cases”.

At the plant launch ceremony, Ghanaian Food and Agriculture Minister Fifi Kwettey appealed for investments in the agriculture sector as it employed more than 50 percent of the country’s population.

“The opening of the WAATCO office in Ghana is a clear indication of the growing partnership between Ghana and India,” he said.

“This is a huge collaboration between the people of Ghana and India which will bring a lot of transformation into the agriculture sector of this country,” he added.

Apart from engaging in various forms of business, Patel is also a sports philanthropist and has supported the growth of cricket in Ghana. He has single-handedly financed the building of the country’s main cricket stadium in the capital.

On why he chose to develop cricket, Patel told IANS that “as a keen cricket fan, l started going out to watch matches and realised that even though the country had budding stars, it lacked proper grounds and players were poorly trained”.

“So I felt it was important for me to contribute my quota to improve the game,” he said.

Patel, who is the chief executive of Balaji Gemlust Company, said he came to Ghana to look for opportunities in the country’s diamond sector and by 2003, he had become a diamond exporter.

“Initially, I invested $1.5 million in the divestment by state-owned Consolidated Diamonds at Akwatia (in Ghana’s eastern region),” he said.

The investment paid off as the Indian businessman became the biggest diamond exporter for three years.

He has also constructed a number of houses on a 2.5-acre plot that he has sold. In addition, he has acquired another 280 acres land at Kuntunse and Adjinkotoku localities near Accra for the construction of more houses.

My mission is not to become a playback singer: ‘Rising Star...