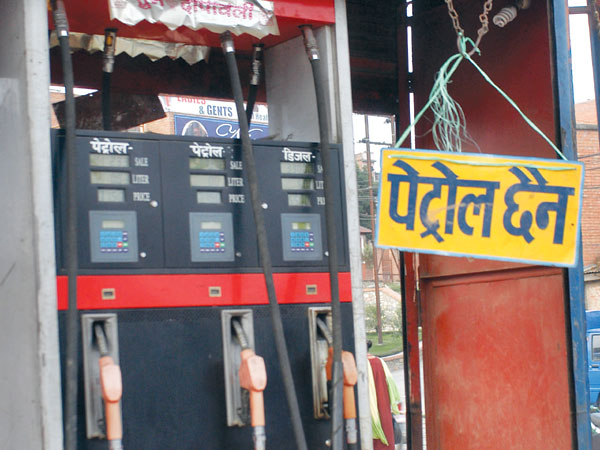 Kathmandu, Oct 7 (IANS) The Indian embassy here has requested the state-owned Nepal Oil Corporation (NOC) for weekly supplies of fuel in view of the ongoing petrol shortage. The plea has led to a storm on Twitter with Kathmandu’s Twitterati launching a sarcastic campaign on the social networking service asking for donations to help out the Indian mission.

The Indian embassy here was among the 16 other missions to place similar requests for weekly fuel supplies as long as the current shortage lasts.

NOC Managing Director Gopal Bahadur Khadka confirmed having received written requests for weekly fuel supplies from 16 diplomatic missions so far. They include the embassies or consulates of India, Malaysia, Mexico, Myanmar and Australia, among others.

“Whether it is diplomatic missions or domestic companies, it is not possible to operate without fuel,” said Khadka.

The official said he had forwarded the letter to NOC’s distribution department with instructions to provide fuel to diplomatic missions in Kathmandu at the earliest. “However, I have not been informed if this has been done so far.”

As the news about the Indian embassy requesting NOC for fuel supplies spread, the Twitterati in Nepal launched a sarcastic campaign asking everyone to donate oil to the mission.

Popular opinion in Nepal, buttressed by the local media as also leading politicians, is that India has imposed an “undeclared embargo” on Nepal after the adoption of the new constitution which has been rejected by the residents of the southern Terai plains of the Himalayan nation.

India has denied restricting movement of Nepal-bound cargo across transit points on the 1,751-km India-Nepal border.

The anti-constitution agitation since last month has claimed more than 40 lives and with protestors blockading major customs points on the India-Nepal border the carriage of commodities to the Kathmandu Valley has been severely hit. As a result, the Nepali capital has begun to reel under scarcity of essential commodities.

Various users have taken to the microblogging site using hashtag #DonateOilToIndianEmbassy and urging everyone to donate liberally and “help them in the hour of need”.

The diplomatic missions here have requested NOC to provide gasoline for their motor vehicles as local stations have run dry. They have written to the NOC for a weekly allocation of 100-150 litres of fuel, presently being rationed.

A source said they have been asking NOC for fuel for the past week and had written to NOC after the Commerce Ministry asked them to get in touch with the state-owned oil monopoly for their gasoline requirements.

The country has been suffering from an acute fuel shortage since the past two weeks.