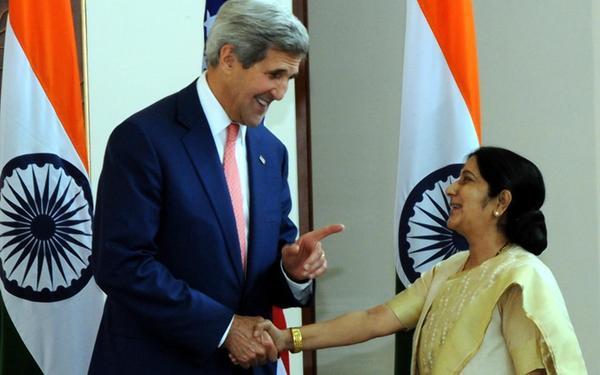 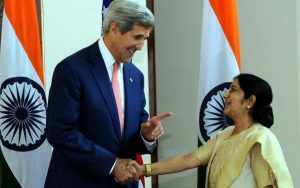 New Delhi: India and the US on Tuesday reasserted the urgent necessity for Pakistan to dismantle safe havens for terrorist groups and criminal networks and said there can be no difference between good terrorists and bad terrorists.

“Secretary (John) Kerry and I discussed at length the issue of terrorism, which is the key challenge to the international community, and the foremost threat to international peace and security,” External Affairs Minister Sushma Swaraj said in a joint press interaction with US Secretary of State John Kerry, Minister of State for Commerce and Industry Nirmala Sitharaman and US Secretary of Commerce Penny Pritzker after the conclusion of the Second India-US Strategic and Commercial Dialogue here.

“I am happy to note that there was a meeting of minds on this issue,” she said.

Sushma Swaraj said that she briefed Kerry on the continuing problem of cross-border terrorism that India and the larger region faces from Pakistan.

“We both agreed that nations must not maintain double standards, such as the categorisation of good and bad terrorists, nor must they act as sanctuaries and safe havens for terrorist organisations,” she stated.

“We reaffirmed the urgent necessity for Pakistan to dismantle safe havens for terrorists and criminal networks including Lashkar-e-Toiba, Jaish-e-Mohammad and D Company. Secretary Kerry and I also agreed on the need for Pakistan to do more to bring the perpetrators of the 2008 Mumbai and 2016 Pathankot terrorist attacks to justice quickly.”

Sushma Swaraj said that she and Kerry also discussed the need to strengthen the international legal regime to counter terrorism.

Kerry said the US continued to support all efforts to bring the perpetrators of the Mumbai and Pathankot terror attacks to justice.

“Let me be clear… United States continues to support all efforts to bring the perpetrators of Mumbai and the Pathankot attacks to justice and we cannot and will not make distinction between good and bad terrorism,” he stated

“Terror is terror no matter where it comes from and who carries it out.”

Kerry also said that the two countries have agreed to exchange “terrorist screening information” to deepen cooperation in designating terrorist groups at the UN.

To a question on resumption of India-Pakistan talks, Sushma Swaraj said that Prime Minister Narendra Modi visited Pakistan in December 2015 “and we got Pathankot in return”.

“Talks and terrorism cannot go together,” she reiterated.

Kerry also said that the US, India and Afghanistan would hold a trilateral meeting in the UN General Assembly session next month in which Indian investments in major Afghan infrastructure projects would be discussed.

Attacks by the Taliban on Afghan territory from across the border in Pakistan would also come up for discussion, he said.

In Tuesday’s meeting, Sushma Swaraj also thanked the US for its continued support for India’s membership in the Nuclear Suppliers Group (NSG) and a permanent seat in the UN Security Council.

“We also had a detailed exchange of views on climate change and clean energy issues,” she said.

“Both our countries attach high importance to the full implementation of the Paris Agreement, in the finalisation of which (US) President (Barack) Obama and Prime Minister Modi played key roles.”

Kerry said that the US would help India upgrade its power grid and the civilian nuclear agreement between the two sides would help provide clean and renewable energy to tens of millions of Indians.

Commerce Minister Sitharaman said India and the US have agreed to add partnership in the travel and tourism sector to the existing work streams under the bilateral Strategic and Commercial Dialogue.

She announced that next year’s Global Entrepreneurship Summit would be held in India and it would be co-hosted by the US.

India also raised the issue of hike in fees of US H-1B and L-1 visas.

India and the US earlier on Tuesday began the economic phase of their Strategic and Commercial Dialogue with Sitharaman asking America Inc to join the country’s ‘Make in India’ initiative.

Sitharaman first met co-chair Pritzker, following which they presided over the India-US CEO Forum, that has Tata Sons Chairman Cyrus Mistry and Honeywell Chairman Dave Cote as the co-hosts.

The Commerce Minister also said that India has shared a model investment treaty with the US.