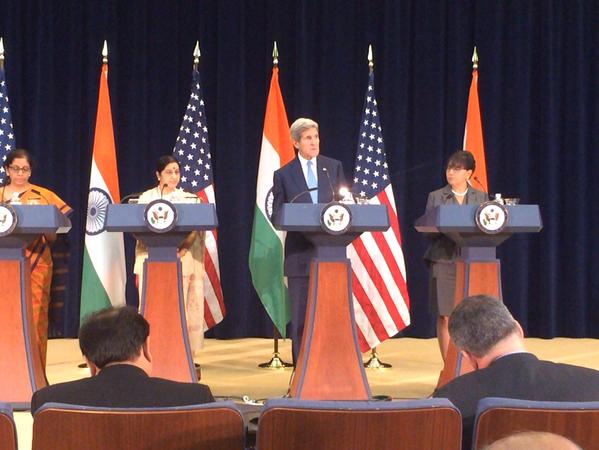 Washington, Sep 23 (IANS) India and the US have agreed to step up cooperation in fighting terrorism and the need for Pakistan to bring to justice perpetrators of the November 2008 Mumbai terror attack, External Affairs Minister Sushma Swaraj said on Tuesday.

“We recognised threats posed by groups like Lashkar- e-Taiba (LeT)operating from safe havens in the region,” she said at a joint press conference with US Secretary of State John Kerry at the conclusion of the first India-US strategic and commercial dialogue.

Describing terrorism as “the biggest menace and also the greatest challenge”, Swaraj said: “We reiterate the threat posed by Al Qaeda, LeT, Jaish-e-Mohammed (JeM), D company and the Haqqani Network and other regional groups.”

India and the US had also reaffirmed “our joint commitment to a secure and sovereign Afghanistan,” said Kerry in response to a question.

The global community must come together to find a solution to the Syrian crisis, he said. “We are committed to augment our efforts regarding ISIL and other groups.”

In response to a question about China, Kerry said there was no mention or intended message to China. It was a India-US dialogue.

“China did not even figure in the conversation. The dialogue was to strengthen India-US relations,” said Swaraj.

Describing US-India relations as a bright spot on international landscape, Kerry said President Barack Obama was strongly committed to this relationship and friendship.

“We have charted new ideas to further strengthen our cooperation in different domains,” he said.

Earlier, as the two sides began their dialogue, Swaraj said: “This is a very busy time for India and US relations. It’s important that we set timelines to achieve our targets.”

India and the US together can shape up a more secure and prosperous future, Kerry said adding that Obama is very much looking forward to meet Modi at the United Nations next week.

Outlining their priorities, Kerry noted that the two sides had set a goal of boosting their bilateral trade five fold to $500 billion in the next five years.

Rural and remote communities in coastal British Columbia will benefit from...

Mayors from around the world gather to discuss how to tackle...