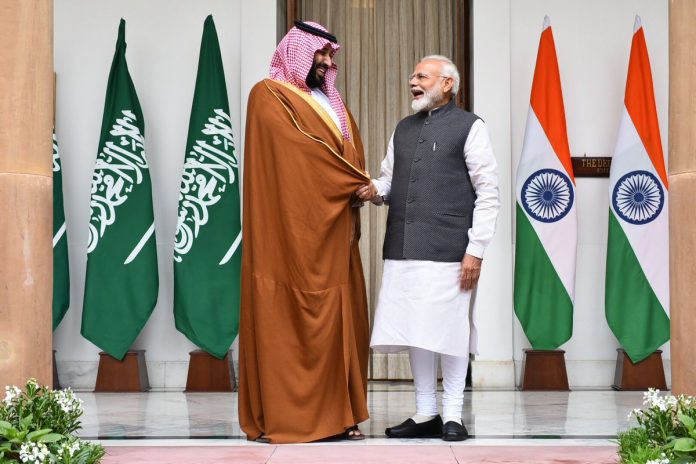 New Delhi: Against the backdrop of the Pulwama terror attack, India and Saudi Arabia on Wednesday said there was a need to exert “all possible pressure” on countries which extend any kind of support to terror activities as they agreed for biennial summit meetings and formation of the Strategic Partnership Council.

However, at the joint interaction with the media after delegation-level talks between Prime Minister Narendra Modi and visiting Saudi Crown Prince Mohammed bin Salman, there was no reference to Pakistan by either leader.

The Prince had just made a two-day visit to Pakistan that ended on Tuesday.

Modi said that the “barbaric terror attack” in Pulwama was another manifestation of the danger posed by terrorism to humanity.

“We agree that to deal with it effectively, there is need to put all possible pressure on countries which are giving any kind of support to terrorism,” Modi said.

He said it was extremely necessary to destroy terror infrastructure and to punish terrorists and their supporters.

Modi said there was need for an action plan to deal with extremism so that the youths were not misguided by forces linked to terror and violence.

“I am happy that Saudi Arabia and India have common thoughts on this,” he said.

Prince Salman, in his remarks, said that extremism and terrorism were common concerns of the two countries and Saudi Arabia will fully cooperate with India.

“As far as the issue of extremism and terrorism, these are our common concerns. We want to tell India that we are ready to cooperate with you in every way, whether it is intelligence sharing.. Not only India but we will work with all the countries in the neighbourhood so that the future of the coming generations is secured,” he said.

Prince Mohammed said India offers investment opportunities of over $100 billon and his country will work to make investments beneficial for both countries.

He said the relations between two countries were “older than history” and these were “in blood”.

Modi said Saudi Arabia was among the most important strategic partners of India in the 21st century.

“It is in our extended neighbourhood, is a close friend and an important source of India’s energy needs. I am happy that in accordance with your suggestion, we have agreed for biennial summit meetings and Strategic Partnership Council. This will strengthen our ties,” he said.

Modi said the two leaders discussed all aspects of the bilateral relationship and decided to take it to new heights. “We agreed to create a structure to facilitate institutional investment from Saudi Arabia. I welcome Saudi Arabia’s investment in infrastructure.”

He said time has come to turn energy relations to a strategic partnership and noted that Saudi Arabia’s participation in world’s largest refinery and strategic petroleum reserve will take their energy relationship beyond that of buyer and seller.

Modi said that the two countries have a common interest in ensuring peace and stability in West Asia and the Gulf.

“Today in our talks, there was agreement on accelerating mutual cooperation and partnership in this area,” he said.

The two countries also agreed that strong relations in counter-terrorism, ocean and cyber security will be mutually beneficial, he said.

He said the two countries have also decided to increase and expand their defence cooperation in the context of their strategic environment.

Modi said that e-visa facility for Saudi nationals is being expanded to boost trade and tourism and thanked Prince Salman for the increase in Haj quota for Indians.

“Peaceful use of nuclear energy, specially for water desalination and health will be another aspect of our cooperation,” he said.

He said presence of 2.7 million Indians in Saudi Arabia is an important link in bilateral ties. “You have always kept their welfare in mind and for this, their gratitude and good wishes are with you,” Modi said.

Earlier, the Crown Prince, who is on his first state visit to India, received a ceremonial welcome at the Rashtrapati Bhawan here.

He told the media that the ties between India and the Arabian Peninsula “is in our DNA”.

“With the leadership of the President and the Prime Minister, I am sure we can create good things for Saudi Arabia and India,” he said.

Prince Mohammed arrived in the capital on Tuesday for a two-day visit and was received by Modi at the Palam airport.

Rahul places Congress ahead of others, says 2019 will shock Modi