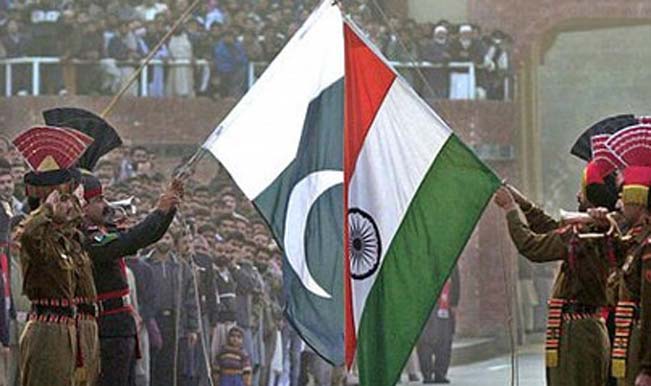 New York/New Delhi, Oct 1 (IANS) India and Pakistan clashed at the UN General Assembly after Pakistani Prime Minister Nawaz Sharif raked up Kashmir in his address, terming the issue “the most persistent failure” of the UN. India hit back, saying Kashmir was unresolved because Pakistan has continuously chosen to disregard its commitments, including the most recent one at Ufa in Russia.

India also gave a rebuttal to Sharif’s proposal to de-militarise Kashmir, asking that Pakistan needs to first “de-terrorise” the state.

India also demanded that Pakistan vacate the occupied area of Jammu and Kashmir, where protests have begun against Pakistani rule.

The clash at the UN came as a mega India-Pakistan series, tentatively scheduled for December in the UAE, appeared to have fallen victim to the political animosity between the two countries. India-Pakistan cricket matches are a huge draw.

In its rebuttal to Sharif’s speech, India on Thursday expressed regret that Pakistan has “once again chosen to misuse” the floor of the world body to “distort reality and portray a false picture of the challenges in our region”.

Exercising India’s Right of Reply during the General Debate of the 70th session of UN General Assembly, India’s First Secretary Abhishek Singh, at the Permanent Mission of India to the United Nations, said: “Pakistan claims to be the primary victim of terrorism. In truth, it is actually a victim of its own policies of breeding and sponsoring terrorists.

“Seeking to mask its activities as though an outcome of domestic discontent in the Indian State of Jammu and Kashmir carries no credibility with the world.”

Rebutting Pakistan’s claim that Jammu and Kashmir was “under foreign occupation”, Singh said that in fact, “the occupier in question is Pakistan”.

He said “India’s reservations about the proposed China-Pakistan Economic Corridor stem from the fact that it passes through Indian territory illegally occupied by Pakistan for many years”.

Sharif had extolled China in his speech, including Beijing’s largesse in building the multi-billion economic corridor, which he said would bring prosperity to the region – rankling India.

He said Pakistan “greatly appreciates China’s proactive role in promoting peace and prosperity in Afghanistan and our region”.

China and Pakistan are all-weather friends, with many of their cooperation activities, including the China building the Gwadar port, perceived as targeted against India.

Singh, in his reply, attacked Pakistan for regretting that the Kashmir dispute has remained unresolved.

He said it has remained unresolved “because Pakistan has chosen to disregard its commitments, whether it was under the 1972 Simla Agreement, the 2004 Joint Declaration forswearing terrorism, or more recently, the understanding between our two prime ministers at Ufa”.

“On each occasion, it is India that has extended the hand of friendship. India remains open even today to engage Pakistan on outstanding issues in an atmosphere free of terrorism and violence.”

To Pakistan raising the issue of ceasefire violations, which it blamed on India, he said: “The world knows that the primary reason for firing is to provide cover to terrorists crossing the border. It needs no imagination to figure out which side initiates this exchange.”

On the terrorism spawned by Pakistan, he said: “It is not uncommon for states, when confronted with serious challenges, to shift responsibility on others.

“That is the case with Pakistan and terrorism, reflecting the inability to recognize that this is a home-grown problem that has begun to bite the hand that fed it. We agree that terrorism has underlying causes – in this case, poverty of wisdom and ignorance of consequences.”

“The heart of the matter is a state that regards the use of terrorism as a legitimate instrument of statecraft. The world watches with concern as its consequences have spread beyond its immediate neighbourhood. All of us stand prepared to help, if only the creators of this monster wake up to the dangers of what they have done to themselves,” he said.

Earlier, in a series of tweets, external affairs ministry spokesperson Vikas Swarup hit back at Sharif’s attempt to term India an occupational force in Kashmir, by comparing it with Palestine and giving it a religious colour.

Sharif had said: “Muslims are suffering across the world: Palestinians and Kashmiris oppressed by foreign occupation.”

“Pakistan is not primary victim of terrorism but of its own policies. It is in fact the prime sponsor of terrorism.

“To de-militarize Kashmir is not the answer, to de-terrorize Pakistan is.

“Pakistan’s instability arises from its breeding of terrorists. Blaming neighbors is not a solution,” he posted.

Indian Prime Minister Narendra Modi and Sharif, though staying at the same hotel in New York last week, did not meet; and at a UN summit on peacekeeping waved to each other across the room, but did not speak to each other.