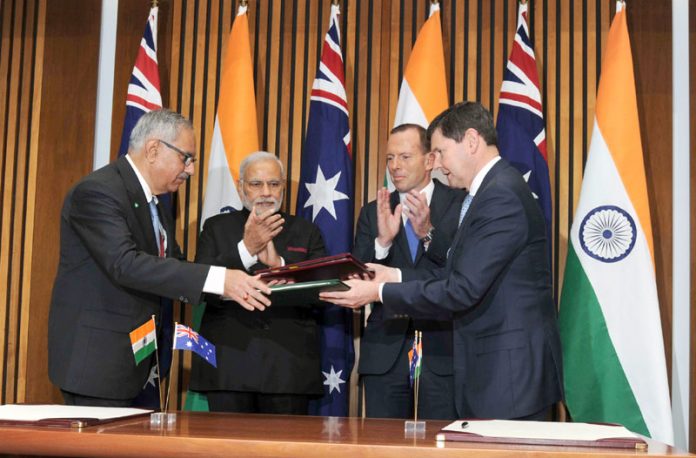 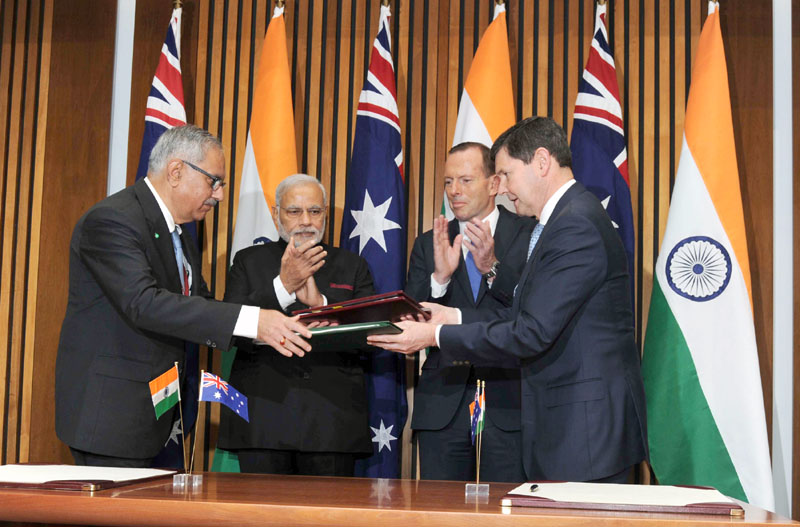 Canberra: India and Australia Tuesday marked a new synergy in bilateral relations as they agreed on a framework for security cooperation to boost defence, civil nuclear and economic ties even as Prime Minister Narendra Modi ended a hectic five-day, four-city visit.

The two countries signed five agreements, including one on exchange of sentenced prisoners, while Modi also addressed the Australian parliament, the first Indian prime minister to do so.

The distinctive feature in Modi’s speeches Tuesday was that he spoke in English – to the media in Canberra after talks with his Australian counterpart Tony Abbott, in parliament, while addressing business honchos in Melbourne, and at the Melbourne Cricket Ground (MCG).

Modi is the first Indian prime minister to visit Australia in 28 years — after Rajiv Gandhi’s 1986 trip.

Modi ended his tour of Australia – he went to Brisbane, Sydney, Canberra and Melbourne – after a dinner hosted by Abbott at the MCG where former Indian cricket greats Kapil Dev, Sunil Gavaskar and V.V.S. Lakshman were present.

Earlier, after talks with Abbot in Canberra, Modi said both countries agreed to seek early closure on their civil nuclear agreement and to speed up negotiations on a bilateral trade pact.

India and Australia also agreed on a framework for security cooperation to reaffirm the bilateral strategic partnership.

Both sides will cooperate in counter-terrorism. Australia will support Indian membership of the export control regimes.

Modi said the two countries had agreed to speed up negotiations on a Comprehensive Economic Partnership Agreement.

He sought easier access for Indian business to the Australian market and quicker investment approvals.

Modi began his 25-minute address to parliament on a lighter note, bringing smiles and laughter among the members.

“I am the third head of government you are listening to this week! I don’t know how you are doing this! May be, this is Prime Minister Abbott’s way of shirt fronting you!”

Modi said both sides need to strengthen their security cooperation to combat terrorism and cooperate closely in international fora like the East Asia Summit, the G20 and the Indian Ocean association.

Abbott said after the bilateral talks that Australia “will export uranium to India under suitable safeguards, of course”.

In a take-off on their close sporting links, Abbott referred to the BJP government’s strong majority in parliament: “Modi has the runs on the ball for getting the bureaucracy working (to get any job done).”

In Melbourne, Modi addressed business honchos in English without a prepared text.

He told the CEOs, including mining magnate Gina Rinehart, BHP chief Andrew Mackenzie, Lindsay Fox and Visy Industries chairman Anthony Pratt, that his government was undertaking reforms to enhance the ease of doing business in India. 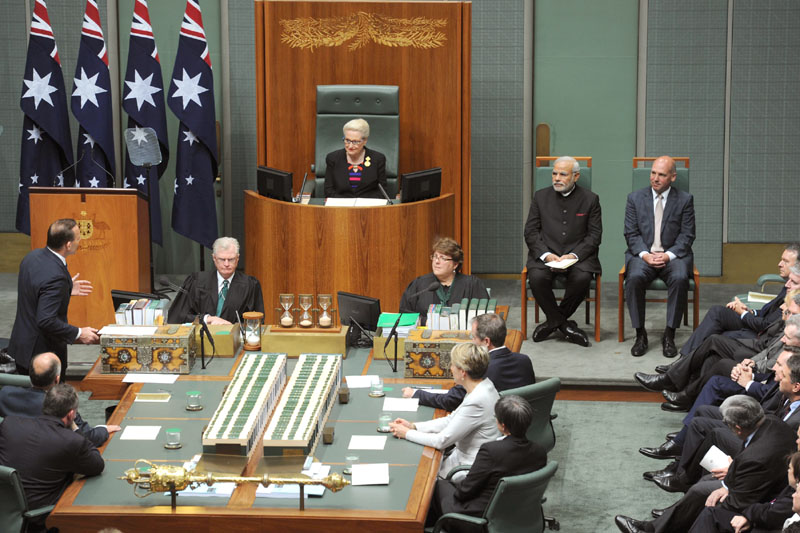 Modi said before his government took over in May, economic growth had slowed down over the last few years.

“My government is making all efforts to ensure faster, all round inclusive growth to revive economy, to create policy environment that is conducive, transparent and fair.”

At the CEOs Roundtable, Modi and the industry leaders discussed education, services, energy, banking and IT.

At the dinner reception at the MCG, Modi said the interaction over the past five days showed that India and Australia have “more place for each other in their hopes and aspirations”.

He said their bilateral ties have taken on a new direction.

A joint statement said that the existing Joint Working Group on Counter-Terrorism would be renamed to cover other transnational crimes, including ongoing cooperation on illegal migration.

Both prime ministers directed that an equitable, balanced, mutually beneficial and high quality Comprehensive Economic Cooperation Agreement be brought to an early conclusion.

It said the Framework for Security Cooperation showed “the unshakeable resolve of the two countries in combating and defeating terrorism, including threats posed by foreign fighters joining extremist groups”.

Modi later left for Fiji. In Brisbane, he attended the G20 and met several world leaders. In Sydney, he addressed a huge gathering of Indian diaspora.