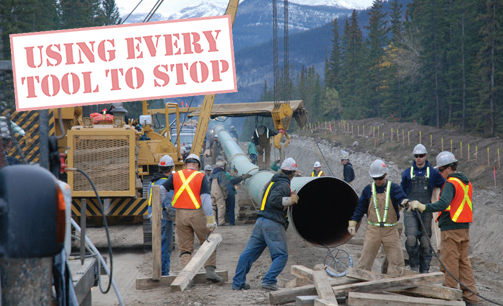 The provincial government announced on Tuesday it has formed a committee to look at environmental impacts of pipelines – work that has already been covered during the Trans Mountain approval process, and despite millions of tax dollars already being invested in spill response. The pipeline was approved nearly two years ago with 194 environmental and legal conditions that Kinder Morgan is obligated to meet.

“It’s time to get to work on this project. This pipeline is in the national interest, which is why the federal cabinet approved it in the first place,” said ICBA president Chris Gardner. “All of the issues raised by Minster Heyman today have been previously addressed in the 29-month-long Trans Mountain approval process undertaken by the federal government, and endorsed by the provincial government. This is simply a stall tactic meant to flout the federal government’s jurisdiction. It’s time for Prime Minister Trudeau to act.”

Gardner called on the federal government and National Energy Board to reject B.C.’s stall tactics and allow construction to proceed on this vital $7.4 billion energy project.

“When it comes to attracting investment to B.C., the provincial government is speaking out of both sides of its mouth,” said Gardner. “In one breath, they’re in Asia, claiming that B.C. is open for business and is a safe, predictable place to invest. In the next, they’re putting road blocks in front of duly-approved energy projects and undermining investor confidence.”

ICBA will be launching an email campaign through its Get2Yes web platform to encourage Prime Minister Justin Trudeau and Natural Resources Minister Jim Carr to push back against the B.C. Government’s overreach and stall tactics.

“Canada and B.C. cannot afford to have governments finding ways to use red tape to try and choke out properly approved infrastructure projects,” said Gardner. “We do not believe the province has this authority, and we call on the federal government to act again in the national interest to move this project forward without further delay.”