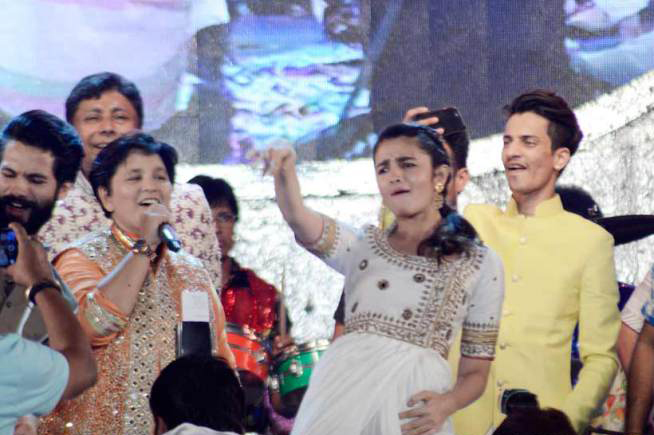 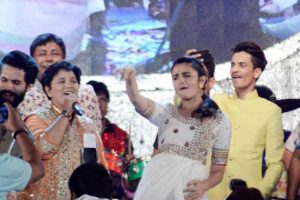 Shahid Kapoor & Aliya Bhatt are riding high after the success of their last films. While SHAHID swept almost all awards for his sensitive portrayal in Vishal Bhardwaj’s Haider, Aliya celebrated the success of every film she starred in last year and that included Highway, 2 States & Dulhaniya and that’s why everyone is looking forward to their first film together.
Presented by Karan Johar, Shaandaar stars Shahid Kapoor & Aliya Bhatt, along with Pankaj Kapoor, Sanjay Kapoor & Diljeet Dosanjh. With the music already blaring all over and the critics going ga ga over Shahid & Aliya chemistry, it seems nothing is spared for the publicity as Shahid & Aliya are at almost every garba pandal, Durga puja pandal, reality TV shows and almost every big & small mall all over India. The success or failure would not affect either as both of them have many other assignments, however, the success could ensure many more pairings in the coming future as they look good and complement each other. The movie could also be a litmus test for Shahid as his romantic image has had some beating in the past but he also has Vishal Bhardwaj’s upcoming film in pocket as well, so it’s to be seen how the public will appreciate him alongside Aliya Bhatt, the heartthrob of youngsters. With PYAR KA PUNCHNAAMA 2 doing much better than expected and Ranbir Kapoor-Deepika Padukone’s TAMASHA & Salman Khan-Sonam Kapoor’s PREM RATAN DHAN PAYO ready to release in November, SHAANDAAR will have to do SHAANDAAR performance at the box-office otherwise Shahid-Aliya’s supposedly SHAANDAAR jodi might not turn out to be that  Shaandaar for Karan Johar!

Amitabh Bachchan shines again on Small Screen!!!
Ever since AMITABH BACHCHAN excelled as the host of KAUN BANEGA KOREPATI, the TRP soared to sky high and time and time again, he’s been awarded the Best TV Game Show Host, so it wasn’t a surprise when STAR TV announced him as the host of AAJ KI RAAT HAI ZINDAGI, honoring the best in the community, however, the verdict is out and once again the general public greeted him in record number all over and the show has been declared a HIT! Bollywood crazy public loves to see their favourite stars up, close and personal and no wonder, SHILPA SHETTY, comedian KAPIL SHARMA, cricketer KAPIL DEV & AJAY DEVGUN were the stars of the opening episode and if the record crowd is any indication, then surely AAJ KI RAAT HAI ZINDAGI will have a long run on Indian TV!

Bollywood attends Garba & Durga Puja festivities !
Like every year, Bollywood made their presence felt at various festivities. Amitabh, Jaya, Abhisheik & Aishwarya were seen at various Durga Puja celebrations and Vidya Balan, Tanuja, Sophie Chaudhary, Shushmita Sen & Sharbani Mukherji were also seen at other Puja celebrations. Shahid Kapoor & Aliya Bhatt joined Falguni Pathak for Garba celebrations and to promote their upcoming film SHAANDAAR, while Salman Khan-Sonam Kapoor promoted their film PREM RATAN DHAN PAYO at various Mumbai sites. Garba festival attracts thousands in Gujarat & Maharashtra ( Guinness Book of World Records entered the 45,000 plus crowd at Baroda Stadium as the Largest in the World ! ) and no wonder, a large number of TV stars were seen doing Garba in India & abroad . With Garba & Durga Puja being the most colourful festivals in India, bollywood joins in big numbers every year and the party continues in DUSSEHRA as well !

Well known Punjabi singer LABH JANJUA, who made it big in Bollywood with continuous hits since 2003, was found dead in suspicious circumstances at his Goregaon flat in Mumbai, India on October 22, 2015. Labh Janjua, who stormed to Punjabi bhangra scene with hit number’ Mundeya To Bachke Rahin…’ in 1999, which was later used in Kaizer Gustad’s film BOOM (2003), became the darling of Bollywood with continuous hits thereafter .’ Chori Chori…’ in Akshay Kumar’s GARAM MASALA (2005), ‘Pyar Karke…’ in PYAR KE SIDE EFFECTS (2006), Soni De Nakhre… in PARTNER (2007),’ O Yaara Dhol Bajake…’ in DHOL (2008),’ Jee Karda…’ &’ Talli Hua…’ in SINGH IS KINNG (2009),’ Dance Pe Chance…’ in RAB NE BANA DI JODI (2009), Anurag Kashyap’s DEV D & EMOTIONAL ATYACHAAR ( 2009 ),’ Farukha Baadi…’ in LUV,SHUV TEY CHICKEN KHURANA (2012),’ London Thumakda…’ in QUEEN (2014) and the recent hit’ Dil Kare Chu Chu…’ in SINGH IS BLING (2015) are some his popular hits in Bollywood. Bollywood, recovering from the shock of untimely death of RAVINDRA JAIN, is absolutely stunned and singers like MIKA SINGH, SUNIDHI CHAUHAN, SONU NIGAM and others have expressed their shock & sympathy to the bereaved family. LABH JANJUA was originally from Khanna in Distt. Ludhiana was only 57, and will be MISSED!

Bollywood at the Prayer Meet for Ravindra Jain Ji!!!

Pyar Ka Punchnaama 2 Punches to the Top!!!
The success of PYAR KA PUNCHNAAMA shocked many when released but the super success of PYAR KA PUNCHNAAMA 2 has surprised almost all as the film has collected Rs. 40 Crores in the first week and it’s still going strong. With an unknown cast, the film was moderately promoted while heavyweights PREM RATAN DHAN PAYO & SHAANDAAR were all over India, but the film clicked from day one and has already been declared a HIT considering its modest budget and surely has surprised big budget films like JAZBAA, TALVAR & RUDRAMMA DEVI but all eyes are on Karan Johar’s SHAANDAAR, which started on DUSSEHRA day and if the critics are to be believed, then it might open with a bang as the pairing of ALIYA & SHAHID has been in news for some time and Punjabi film SHAREEK with JIMMY SHERGILL, who promoted the film with Jazzy B at MIKA SINGH concert last week at the ORPHEUM. That’s all folks, as we start counting the days for DIWALI and await biggies at the box-office, but meanwhile many events are happening around, so please check KVP ENTERTAINERS Facebook page and don’t forget to watch RAVINDRA JAIN’s YAADEIN on Sunday, October 25th @ 1 PM on SMC #116 !

Almond and Yam Cutlets With coriander and Cashew pesto –...

What are Common and Costly Bookkeeping Mistakes? – By Dawn Loeffler