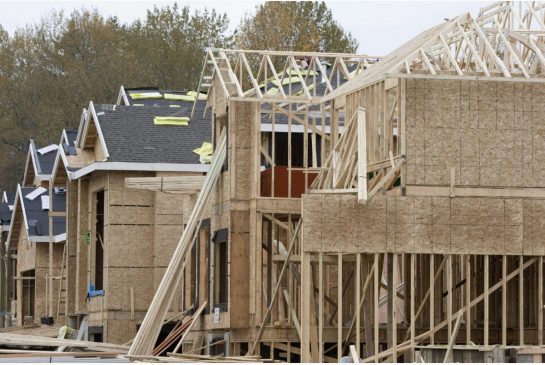 Ottawa: Canadian housing construction heated up in August, driven by a 19.5 per cent increase in urban multi-unit projects, primarily in Ontario.

Canada Mortgage and Housing says the annualized pace of housing starts in August increased to 216,924 units nationally, including 142,927 units in urban multi-unit projects.

That compares with 193,253 units started in July overall, including 119,478 urban multi-unit projects.

On a seasonally adjusted basis, there were 58,385 single-detached housing units started last month, up 1.4 per cent.

CMHC says the pace of urban housing starts declined in most regions of the country, with Ontario being the main exception. Prince Edward Island also had an increase to 423 units from 255 in July.

In Calgary, there was more construction of all types of dwelling in August than in July but less than the same month last year, prior to the collapse of oil prices in late 2014. In Edmonton, there were declines from both July and August 2014.

In British Columbia, seasonally adjusted starts declined to 26,349 units in August from 36,510 units in July. In Vancouver, there was a decline to 16,729 units in August, down from 27,317 in July when there was an unusually high number of housing starts.

CMHC notes that month-over-month comparisons can be highly variable, particularly with multiple-unit projects. It considers the six-month trend to be more indicative.

“Housing starts have been trending up, supported by strong condominium activity in Toronto,” CMHC chief economics Bob Dugan said in a statement.

“While national starts have increased, housing construction has started to slow in Alberta and Saskatchewan as a result of weakening economic conditions related to the decline of oil prices.”

A separate report released Wednesday by Statistics Canada says building permits issued for residential construction rose 8.7 per cent to $5.0 billion in July, following a 16.7 per cent increase the previous month. Gains were registered in four provinces, led by Ontario and British Columbia.

Including non-resident constructions, the value of building permits issued by Canadian municipalities edged down 0.6 per cent to $7.7 billion in July, following a 15.5 per cent increase in June. Lower construction intentions in the Ontario’s and Alberta’s’ non-residential sector, accounted for much of the decrease at the national level, Statistics Canada said.