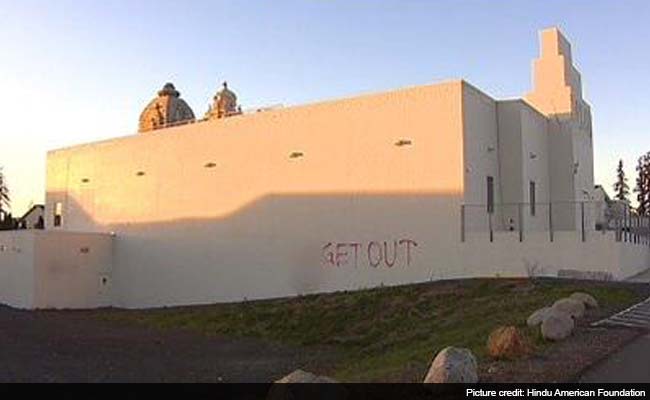 New York/New Delhi, Feb 17 (IANS) In the latest attack targeting Hindu places of worship, a temple in the US was vandalized on the eve of the celebration of Maha Shivaratri, triggering strong reaction and protests in India.

Members of the Hindu Temple Cultural Center in Bothell, 36 km from Seattle, in Washington state were shocked to find a red swastika spray-painted on the temple wall along with the words “Get Out” scrawled in large letters on Sunday.

The Bothell Reporter newspaper reported that the incident was under investigation but no suspect has yet been identified according to Shari L. Ireton, a spokesperson for Snohomish County sheriff.

“The timing of this crime, occurring before a major Hindu festival, warrants special attention from law enforcement,” said Jay Kansara, Hindu American Foundation’s director of government relations. “We are encouraged by the ongoing thorough investigation of the Bothell City Police Department.”

In the US, white supremacists have adopted the Nazi swastika as an ideological symbol. KING 5 TV, an NBC-affiliated station in Seattle, said: “In Hinduism, swastikas signified peace long before it became a Nazi symbol. In this case, temple leaders say it’s now being used not just to hurt their believers but a neighborhood.”

In Uttar Pradesh’s Kanpur city, activists of the right-wing Vishwa Hindu Parishad (VHP) and Bajrang Dal protested against the temple vandalisation, while the Congress said the attack was a “slur” on the name of America and expressed surprise that the Indian government had not reacted in the matter.

“It is a slur on the name of America,” he said adding: “It is very shocking. US is a society which claims to be inclusive. They would have surely reacted if something like this had happened in India.”

“What happened is totally unacceptable, US authorities must take stringent action in the temple vandalizing incident and come out with a statement,” he said.

Rajan Zed, president of Universal Society of Hinduism in a statement in Nevada, said that it was shocking for the hard-working, harmonious and peaceful Hindu community; who had made lot of contributions to the nation and society; to receive such signals of hatred and anger.

There has been a spate of anti-Hindu across the US in recent months. In August, a idol of Shiva at the Vishwa Bhavan Hindu Mandir in Georgia state was desecrated with black paint. The phone lines of the temple in Monroe, were cut and graffiti with hate messages were written on it. The local sheriff’s office arrested two people in connection with the attack.

In response to these attacks, the US Justice Department has mandated the inclusion of anti-Hindu hate crimes as a category in crime-reporting forms starting in January.

In an incident involving an Indian, but not directly linked to his religion, 57-year-old Sureshbhai Patel was attacked by a police officer in Madison in Alabama state and left partially paralysed. The officer was dismissed from the police force.

In Bothell, a government-run school was also defaced with a swastika and the words, “Muslims Get Out,” according to Q13 Fox.