High stream flow advisories issued across most of province

For the last month the nightly news has been chronicling the flooding across the interior of BC as the streams feeding the Okanagan and Shuswap Lakes quickly rose, bringing the lakes to flood levels. They are also seeing high water, debris and other hazards right here in the Lower Mainland. Now, the run-off, known as the freshet, has prompted authorities to issue a High Stream Flow Advisory for the Fraser River extending from the Fraser Canyon to the ocean.

Steve Litke is Senior Manager with the Fraser River Basin, a not for profit, non-government organization working to address a wide range of sustainability issues across BC. They focus on the Fraser River basin, which comprises about one-quarter of the land mass of BC, or about 233,000 square kilometres, starting in the Rocky Mountain trench near Jasper and moves through a vast and diverse area of communities and eco-systems to the Georgia Straight.

Ray Hudson: What is the scope of this year’s freshet?

Steve Litke: The snow packs in most parts of the Fraser River Basin are above average, but not extremely high. They vary widely in size because of weather-related delays in the snow melts. I saw the Rivers Forecast Centre saying the snow melt is delayed anywhere between one and three weeks beyond what would be typical. The Forecast Centre indicated that we should expect flows on the lower Fraser to be slightly higher than normal in the next week. I guess we’ll see how the weather cooperates in terms of driving river flows. If there’s a lot of rain, or if it gets quite hot, over the next couple of weeks, both of those things will accelerate the melt and add water to the river flow. 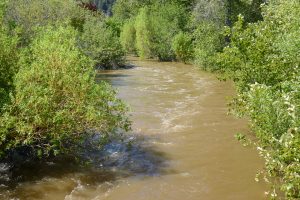 Ray Hudson: Some of the references to the snow pack and water levels are being compared to 1948 when the lower Fraser Valley suffered a disastrous flood. Is this a possibility?

Steve Litke: I don’t think so. Extreme conditions could certainly unfold, but I would defer to the forecast center. They said that the snowpack accounts for twenty to forty percent of the factors that drive flood flows on the Fraser, but the actual weather is about sixty to eighty percent of that equation. The other thing to note is, because the Fraser River Basin is such a large area, the different sub-basins might experience very different weather conditions from one region to the other.

Ray Hudson: I would expect that the flood prevention infrastructures would be much more sophisticated than in 1948?

Steve Litke: There was the Fraser River Flood Control program that rehabilitated different diking systems following 1948, so there have been some improvements. But we are working with local governments and other partners, on a regional flood management study, including an assessment of the diking systems. We found that most of these systems in the Lower Mainland don’t meet current provincial standards because those standards weren’t part of earlier construction considerations, such as; water levels that are now anticipated to be higher than the historic floods of record, the previous standard. There are also new seismic guidelines for dikes.

Ray Hudson: We’ve seen some fatal encounters with high and fast water this spring, specifically the Cache Creek Fire Chief and possibly a teacher in the Kootenays. What do you advise people who want to go to the lakes and picnic grounds, or go hiking or camping?

Steve Litke: I’m not really an expert on this, but you really want to be careful around fast flowing rivers and streams. Stay away from the river banks because there’s always the possibility that they have been undercut and, if you walked on them, could collapse and drop you into the river.

Authorities say most people have played in streams during summer when stream flows are much reduced. During this period, streams flow much faster and deeper, but even water below the knees can pull a person over. The water is very cold and a person, if caught in a current could be swept into debris and not be able to get out. Better to stay back, and keep the kids and the dog a safe distance from any flowing water right now. Also authorities are warning people that it’s best to stay off the water until the debris clears. A deadhead in the river or lake could capsize or hole your boat and put you in a life threatening situation. With the lakes so high, boat wakes can also cause damage to sand bag barriers.

So it seems that the best advice is to let nature have her freshet and when it’s done, it will undoubtedly be much safer to go back into (or onto) the water.

For current river and stream flow conditions across the province, please check the BC Rivers Forecast Centre at bcrfc.env.gov.bc.ca/fresheet.index.htm You can also find more information at fraserbasin.bc.ca