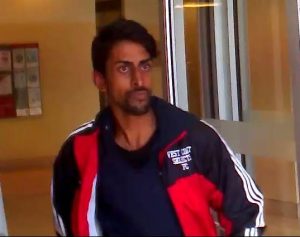 Surrey RCMP is asking for the public’s assistance to identify an alleged robbery suspect captured on surveillance cameras.

On August 10, 2016 at 3:50 pm, Surrey RCMP received a report of a bank robbery near the intersection of 120th Street and Nordel Way. The suspect produced a weapon and threatened staff before fleeing the scene. Thankfully no one was hurt in the incident.

Surrey RCMP Robbery Unit is leading this investigation and has obtained a surveillance photo.

The suspect is described as a South Asian male in his early 20’s, with a thin build. The suspect was wearing a black and red jacket with white stripes and “West Coast Selects FC” on the upper left chest.

“Institutional robberies are not victimless crimes,” says Corporal Scotty Schumann. “It can be a very traumatic incident for anyone involved. Protecting the employees and customers is a priority for police, and by identifying this suspect we can improve safety for all.”