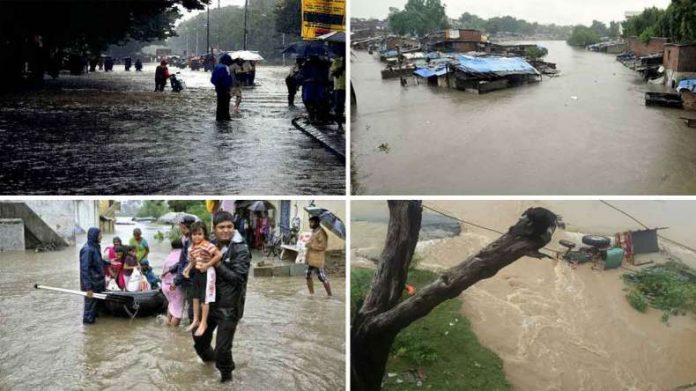 New Delhi, June 25 (IANS) Continuous rains have swollen many rivers and created a flood-like situation in Gujarat even as at least 45 people have died following heavy showers in Saurashtra and south Gujarat, officials said.

Amreli district is the worst hit, with 36 deaths reported on Wednesday. The meteorological centre at Ahmedabad on Thursday predicted moderate to heavy rains in the coming days.

“The south-west monsoon has covered the entire Gujarat. Monsoon is active over Gujarat region and vigorous over Saurashtra,” an official of Ahmedabad Meteorological Centre told IANS.

The official said: “Moderate to rather heavy rain would occur at most places in Gujarat region, Saurashtra-Kutch and in Diu, Daman, Dadra Nagar Haveli. The weather is about to remain same for the next five days.

“Floods too cannot be ruled out at the moment,” he added.

According to All India Radio, 13 people died when two houses collapsed in Nani Vabhaniya village near Bagasara town of Amreli district.

Three people died in Bhavnagar district, two in Gaondal in Rajkot district and three lost their lives in Surat district due to the floods.

Gujarat Chief Minister Anandiben Patel, who reviewed the flood situation at a high-level meeting in Gandhinagar, urged people not to panic.

She also held meetings with senior officials and the Indian Air Force and discussed the situation with district officials.

The National Disaster Response Force (NDRF) and the IAF have been pressed into service for rescue and relief work in Amreli district.

Additional companies of State Reserve Police (SRP) have been sent to all affected areas. Over 100 people were airlifted in Amreli while about 1,000 people were evacuated in Surat.