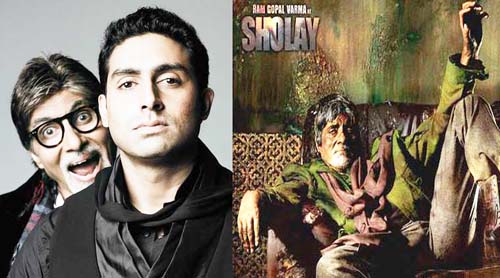 New Delhi, Aug 31 (IANS) The Delhi High Court on Monday imposed a fine of Rs.10 lakh on film maker Ram Gopal Varma and his production house for making the remake of 1975 blockbuster ‘Sholay’, which violated the exclusive copyright vested with its director Ramesh Sippy.

Justice Manmohan Singh said that Varma and others by making “Ram Gopal Varma ke Sholay: have “intentionally and deliberately” brought the movie in violation of plaintiffs’ exclusive moral rights of copyright.

The court’s order came on a lawsuit filed by Sascha Sippy, son and grandson of original Sholay’s producers Vijay Sippy and G.P. Sippy, alleging that remake was violative of exclusive copyright held by the Sholay Media and Entertainment Pvt Ltd.

The court slapped a fine of Rs.10 lakh as “punitive damages” on Varma, his production house M/S RGV Productions Pvt Ltd as well as Varma Corporation Ltd and Madhu Varma and restrained them from using any character like “Gabbar or Gabbar Singh” in the original film.

“The publicity material coupled with the impugned film, gives an overall impression that it is a remake of the film ‘Sholay’,” the order said.

“The use of similar plot and characters in the impugned film coupled with use of the underlying music, lyrics and background score and even dialogues from the original film ‘Sholay’ amounts to infringement of copyright in the film ‘Sholay’.”