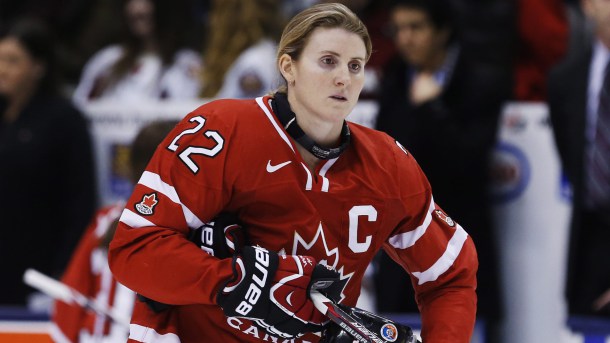 She was able to do both in time to re-join the Canadian women’s hockey team for this week’s camp in Calgary.

Wickenheiser, a four-time gold medal winner and Canada’s all-time leading scorer, underwent season-ending surgery in Toronto on Feb. 18 to have a plate and eight screws inserted in her left foot.

She played in the 2014 Winter Games in Sochi, Russia, with a broken bone in that foot and helped lead Canada to a 3-2 win over the United States for the gold.

Wickenheiser had a screw surgically implanted in her left foot a little more than a year ago, but pain continued to affect her.

Of the 47 women invited to training camp, only Wickenheiser and goaltender Charline Labonte are in their 30s.

Wickenheiser and Hefford are the only two Canadian women to have played in all five Olympic women’s hockey tournaments. They won gold in four of them.

Wickenheiser also played softball for Canada in the 2000 Olympics.

Her foot responding the way it has, she was contemplating a seventh Olympic appearance in the 2018 Winter Games in South Korea.

“I’d like to play through 2018,” Wickenheiser said. “Today, I don’t see any reason why I can’t. Physically I’m fitter than I’ve ever been really, considering my foot and the way I was able to come back and feel pretty healthy and good on the ice.”

Of the issues Wickenheiser has played through in her two decades representing Canada, the foot injury had the potential to end her career.

So when Wickenheiser’s surgeon told her she couldn’t put weight on her foot for four months, she listened.

“It was a pretty serious injury to the point where they said if you put any weight on it you could risk long-term damage,” Wickenheiser said Tuesday.

“This is the most serious injury I’ve ever had in my career _ a lot of dark days wondering if I’d ever walk normally again. I did everything the surgeon said.”

In the weeks following surgery, Wickenheiser did one-legged wind sprints using a scooter and wrapped her cast in a garbage bag so she could swim laps.

“I had to be very creative in my training and my rehab, but I think I made really good progress in the span of six months to be back here,” she said.

Wickenheiser started skating in July, but she’s held off on running and jumping in dry land training.

“The bone is now fully healed,” she said. “If I was a sprinter or a track athlete I wouldn’t be back at this point, but because it’s hockey I can get away with that lateral push and it doesn’t seem to bother me.”

Statement from Premier John Horgan on on the occasion of Gurpurab