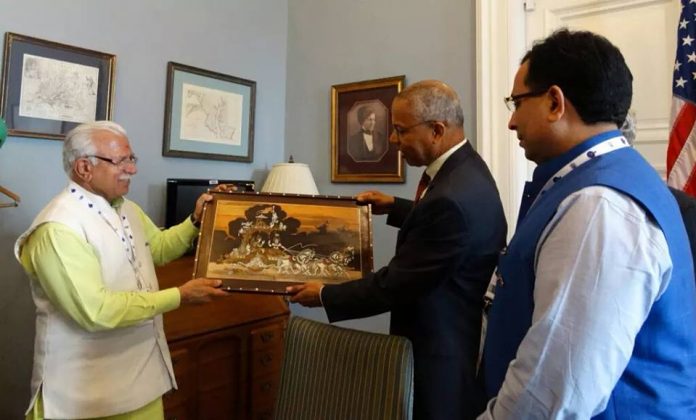 Washington, Aug 19 (IANS) Haryana and the US state of Maryland have agreed to explore the possibility of cooperation in the fields of biotechnology, life sciences, agriculture, cyber security and engineering.

Haryana Chief Minister Manohar Lal Khattar and Maryland Lt. Governor Boyd K. Rutherford agreed to do so at a meeting in state capital Annapolis on Tuesday.

They also decided to find out scope for working with companies engaged in the sector of low-cost housing in Maryland.

In a bid to take forward the sister-state relations between Haryana and Maryland, Khattar said the state government was looking forward to exploring scope for cultural exchanges and avenues for cooperation.

Khattar, who is leading a 20-member delegation of officials and businessmen on a 10-day trip to the US and Canada, was accompanied by Industries and Commerce Minister Abhimanyu among others.

There he sought cooperation and guidance from its Bloomberg School of Public Health for upgrading the Kalpana Chawla University of Health Sciences being set up at Karnal in Haryana as a Centre of Excellence.

The Haryana government is setting up the university in memory of the first Indian-origin astronaut Kalpana Chawla.