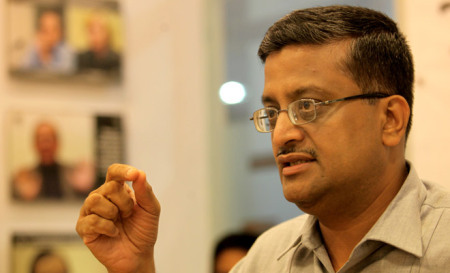 Khemka was chargesheeted in December 2013 by then Congress government in Haryana led by Bhupinder Singh Hooda for “administrative misconduct” and “exceeding his jurisdiction” in cancelling the mutation of the Rs.58 crore controversial land deal of October 2012 between Vadra’s company Skylight Hospitality and realty giant DLF.

The cancellation of the land deal’s mutation was done in October 2012 by Khemka.

The dropping of the chargesheet was based on the reply submitted by the officer to the Haryana government and a personal hearing given to Khemka by Chief Minister Khattar on October 6 this year.

Khemka, who had blown the lid off the shady land deals by Vadra and his companies in Haryana’s national capital region (NCR) area, was transferred from his post by the previous Hooda government as he was in the process of initiating action against Vadra.

Khemka had also ordered an inquiry into the undervaluation of land deals done in four districts in Haryana, adjoining Delhi, by Vadra.

Both orders were passed by Khemka after he had been transferred as director general-consolidation and inspector general-registration by the state government.

Khemka was also charged with going against service rules by going to the media openly and even criticising government policies. Khemka had freely given TV and other media interviews as Vadra’s land controversies came out.

Embarrassed by Khemka’s actions and statements, the Hooda government had set up a three-member committee of senior IAS officers to look into the issue. The committee, in its report, had stated that Khemka’s actions amounted to administrative misconduct and exceeding jurisdiction.

The committee submitted its report even without calling or examining Khemka once.

Khemka’s 105-page reply to the committee’s report, in which he highlighted various other land scams and sham deals and companies associated with Vadra and other influential people, was not accepted by the Haryana government.