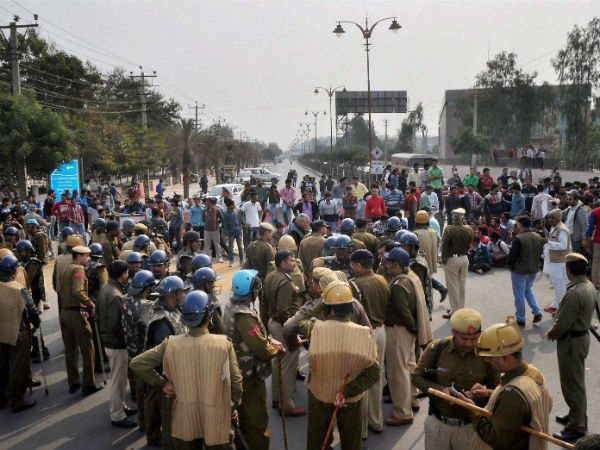 Rohtak/Chandigarh, Feb 23 (IANS) Haryana saw relative calm for the first time in nine days on Tuesday as Jats seeking job quotas withdrew from the streets or were chased away. Highway and rail traffic was restored even as security forces were on alert to foil clashes between Jats and non-Jats.

In a sign of people’s anger over the mindless violence that rocked the state, Haryana Chief Minister Manohar Lal Khattar faced angry traders and residents in Rohtak town and was forced to retreat and leave for Delhi.

Khattar, who reached Rohtak for the first time after widespread violence during the Jat agitation devastated many parts of the town, vowed not to spare those guilty of rioting and arson that crippled Haryana.

“A high-level probe will be conducted into the (violence) and strict action taken against officers and employees of police and administration involved in this,” Khattar told the media in Rohtak.

In a fine balancing act, he said the Jat community will get job quotas under a special provision and the OBC quota of 27 percent won’t be disturbed. The OBC communities don’t want Jats to be included in the OBC bracket.

“The government will make a separate provision for (Jats) reservation,” said a stern-looking Khattar, whose government has drawn widespread flak for failing to contain the frenzy on the streets.

In New Delhi, Khattar attended a meeting with union Parliamentary Affairs Minister M. Venkiaih Naidu and other ministers who are part of a high-powered panel studying the issue of reservation for Jats in other states.

Nineteen people were killed and nearly 200 injured in the nine days when Jats held Haryana to ransom, and in the process disrupted life in large parts of northern India.

As Monday was a holiday on account of Sant Ravidas Jayanti, Tuesday was the first working day after the Jat agitation. Most schools were, however, shut.

Curfew was relaxed in Rohtak town and some other places. Some villages and towns were tense as some members of Jat and non-Jat communities headed for a clash on Monday.

The government has an ex-gratia of Rs.10 lakh to the next of kin of the innocents killed in the agitation and employment to a member of the family of the deceased. The PHD Chamber of Commerce and Industry has pegged the loss to Haryana and other states due to the violence at Rs.34,000 crore.

The India-Pakistan train and bus services, which pass through Haryana, are expected to resume operations on Thursday.

Referring to an audio clip in which a close aide of a Congress leader is heard inciting people to indulge in violence, Khattar said those who damaged property would be identified and strict action taken against them.

The government has promised to compensate those who lost property in the agitation.

The chief minister said ‘dharnas’ across the state had been lifted and blockades on all roads cleared.

Earlier, Khattar was shown black flags by a section of traders and residents who raised slogans against him and questioned his government’s failure to deal with the Jat agitation.

The Punjab and Haryana High Court on Tuesday directed the Haryana government to submit a status report on the Jat agitation by next Monday.

The Jat community wants reservation under the OBC category in government jobs and educational institutions.

B.C. boy sentenced for movie like attempted murder of his little...