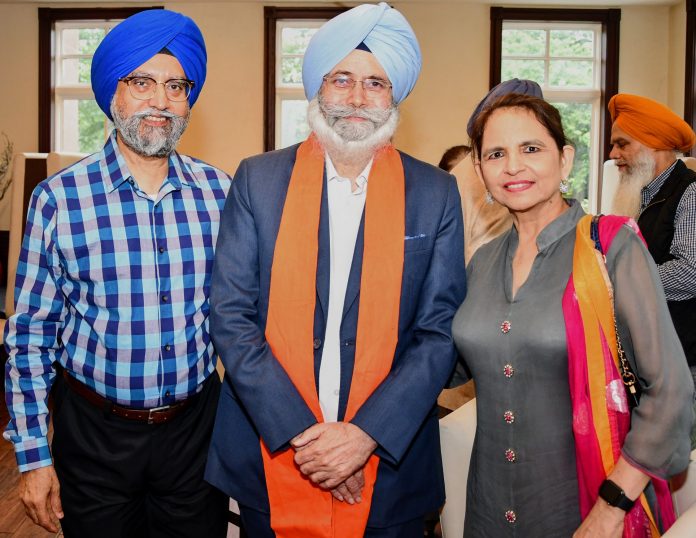 Washington: Harvinder Singh Phoolka, who has been fighting a legal battle for the Sikh victims of November 1984 organized massacres, was honored by the Washington Sikhs. An evening get together at Diya restaurant in honor of Phoolka, he shared his challenging struggle to provide justice to the families of Sikhs murdered in November 1984 in the aftermath of Indira Gandhi’s assassination. All investigations have pointed to the Congress Party’s apparatus which encouraged and executed this organized violence in which Sikhs were brutally killed indiscriminately and their property burned and looted.

“I started my struggle when I was aged 28, and this seemed an impossible task,” said Phoolka. He elaborated that many Sikh and Non-Sikh jurists and human rights activists, including Soli Sorabjee, Justice Tarkunde, Justice Sinha, Advocate Malik, Rajni Kothari, General Jagjit Singh Arora, Brigadier Chatwal, Khushwant Singh joined and helped in this movement for Justice. This gathering was hosted by Dr. Rajwant Singh and Dr. Balvinder Kaur of Potomac, Maryland.

He said, “there were many challenges ahead of us as Rajiv Gandhi had won with super majority and Sajan Kumar, Jagdish Tytler, and many government officials used their political power to refrain and sabotage us. However, we continued on our path with more fervor. A 30 member committee of influential and prominent individuals was formed and I was appointed as it’s secretary.”

He added, “Non-Congress governments in Delhi helped and we were assisted to some extent by the Vajpayee and Modi Government. Whatever my political leanings were I never hesitated to ask non-congress governments for help. However, there are many instances when government authorities like Police and Central Bureau of Investigation tried to interfere in the legal process and put pressure on the witnesses to alter their statements. Many commissions were formed and yet justice was denied to so many. Many cases were closed because either the witness was no more or accused had died.”

He continued, “At last, I made a commitment to hasten the proceedings and decided to leave active politics. I always believed our battle is not just for the cause of Sikhs, in fact, this was for the restoration of the norms for civil society in a democracy.” I had also worked for rights of the children and joined to legally support Kailash Satyarthi’s work. He later won the Nobel prize and I attended the ceremony in Oslo. This helped me to persuade many judges to listen to 1984 cases because previously they always were biased against me and considered me an attorney for the terrorists.”  I never hesitate to ask for assistance from any political group for the right cause. Just as I coordinated with BJP governments for 1984 cases, I will not hesitate to get the help of Captain Amarinder Singh’s government in Punjab to set a date for SGPC elections.

He added, “It’s important to make SGPC free from the Badal family and to save the prestige of this eminent Sikh Institution. SGPC’s work has been hampered severely due to political interference and corruption by the current leadership. All Sikh intellectuals and activists should ensure that the candidates for SGPC elections must not be connected with any political faction.”

In his ending remarks, he praised the initiatives of EcoSikh on 550 Guru Nanak Birthday celebrations and Sikh human development Foundations scholarship program for students in Punjab.

Dr. Rajwant Singh, Secretary of Guru Gobind Singh Foundation and Senior Adviser to National Sikh Campaign, welcomed Phoolka on behalf of the gathering. He said, “We need more individuals like Mr. Phoolka to strengthen the democracy in India and the rule of law. We are pleased that at last criminals like Sajjan Kumar are finally behind bars due to efforts of Mr. Phoolka.”