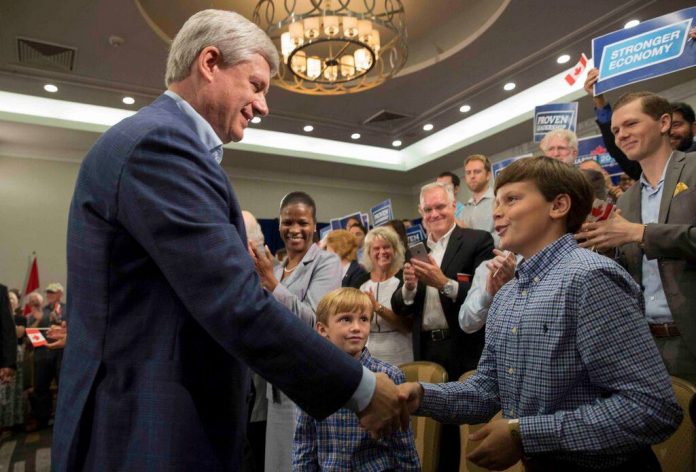 By Mike Blanchfield, THE CANADIAN PRESS

OTTAWA: It’s a potentially pivotal moment in the federal election that had federal leaders pirouetting on the campaign trail on Monday.

Statistics Canada is to release the second-quarter GDP figures on Tuesday morning and they are expected to show negative growth, which would meet the technical definition of a recession.

On Monday, as the fifth week of the campaign opened, Stephen Harper dodged questions about the definition of a recession. The Conservative leader, running on his party’s economic stewardship, says he won’t get into a discussion of economic technicalities.

NDP Leader Tom Mulcair appeared to hedge his bets Monday, allowing for possibility that even if the statistics agency doesn’t confirm a technical recession that’s no reason to let the prime minister off the hook for what he says is the country’s weak financial situation.

Meanwhile, a leading economist questioned all of the political posturing over the economy that’s taken place in the last week.

Don Drummond, the Stauffer-Dunning Fellow at the School of Policy Studies at Queen’s University and a former chief economist at TD Bank, said the partisan parsing of economic indicators is ultimately misleading.

Whether the economy contracted or grew by a small fraction of a percentage point, or whether the federal budget is in or out of deficit by a few billion dollars simply doesn’t matter in the terms of the bigger economic picture, he said.

“I think it’s a real travesty because it makes us miss the main point,” Drummond said in an interview Monday.

“The biggest point is: the world, not just Canada, is entering a period of sustained lower growth. Everybody seems to have missed that. You wonder how many times it takes for people to get with that program.”

For Drummond, that means accepting that the annual growth rates of four or five per cent of the last decade won’t be on the horizon any time soon. Get used to two per cent growth and that economy is now weaker overall.

“It’s weak regardless whether the number is minus 0.1 or plus 0.1. It makes absolutely no difference,” Drummond said.

“I’m one of those dull economists that doesn’t think it really matters if the number is a slight negative or a slight positive.”

Liberal Leader Justin Trudeau has said he would run what he called modest deficits to 2019 in order to pay for new infrastructure investments that he deems necessary to grow the economy.

Harper and Mulcair promise balanced budgets and are critical of Trudeau.

But both Mulcair and Trudeau accuse Harper of driving the country into a recession, basing their attacks on the most recent Statistics Canada monthly figures that showed negative growth in the first five months of the year.

Harper wasn’t interested Monday in talking about how he defines a recession.

“I haven’t got into that debate,” Harper told reporters in Ottawa.

He reiterated his stay-the-course message, insisting that the overall economy is strong because only the weakness is in the energy sector.

“The question for Canadians is what do you do with that? Because of this temporary effect, do we now plunge our country into a series of permanent deficits and tax hikes? We thank that is precisely the wrong answer,” Harper said.

Harper made no mention of the fact that other sectors beyond energy are also hurting. According to the most recent figures, several other sectors declined between May 2014 and May 2015, including durable manufacturing industries which fell by 4.8 per cent and industrial production, which fell by four per cent.

Mulcair, meanwhile, appeared to make an allowance Monday for the possibility that Tuesday’s data release might not show a contraction, as most observers expect.

“The classical technical definition is: two quarters in a row of negative growth is a recession . . . this is a technical definition,” Mulcair said, but added: “Whatever is in that report, it’s not going to change the fact that Stephen Harper’s plan is not working.”

Mulcair reiterated two statistics that he said backed that up: 200,000 more unemployed since the 2008 recession and the loss of 400,000 manufacturing jobs.

Trudeau had no campaign events scheduled on Monday.

Government of Canada announces $50 million in funding for temporary housing...