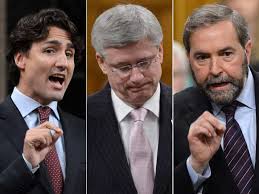 The three leaders offered sharp differences of opinion on the economic way forward after the agency reported on Tuesday that the economy contracted for a second straight quarter, the technical definition of a recession.

Trudeau said that both Harper and Mulcair will have to cut spending to honour their pledges of a balanced budget.

“They want to cut programs and they hope in vain that the same plan that has been in place for the last 10 years will still work and will kick-start the economy,” the Liberal leader said in Trois-Rivieres, Quebec.

Trudeau says only his plan to run deficits to 2019 and increase infrastructure spending will spur real growth in a slackening economy.

“Mr. Harper doesn’t understand that in order to grow the economy in the 21st century we need to invest in people and give them the tools they need to succeed,” he said.

“Confident, optimistic countries are always willing to invest in their own future rather than believe that cutting is somehow the path to growth and success.”

Harper said the economy is not doing badly and will grow later this year, so the budget must be balanced.

“Proposing a deficit right now with economic growth is a recipe for permanent deficits,” the prime minister said in North Bay, Ont.

“It’s why we’re not going to do it and why I think the country will reject that proposal from the other parties.”

But Mulcair insisted his New Democrats won’t run deficits either if they win power.

He reiterated that the NDP will be able to deliver on its various spending promises by cutting some Conservative initiatives.

“We have a plan for investing in infrastructure and housing, but it’s all done within the framework of a balanced budget,” Mulcair said in Kamloops, B.C.

“Tommy Douglas balanced the budget 17 times in Saskatchewan and still brought in medicare in Canada for the first time.”

Five things that could push the federal budget deficit past $20B...