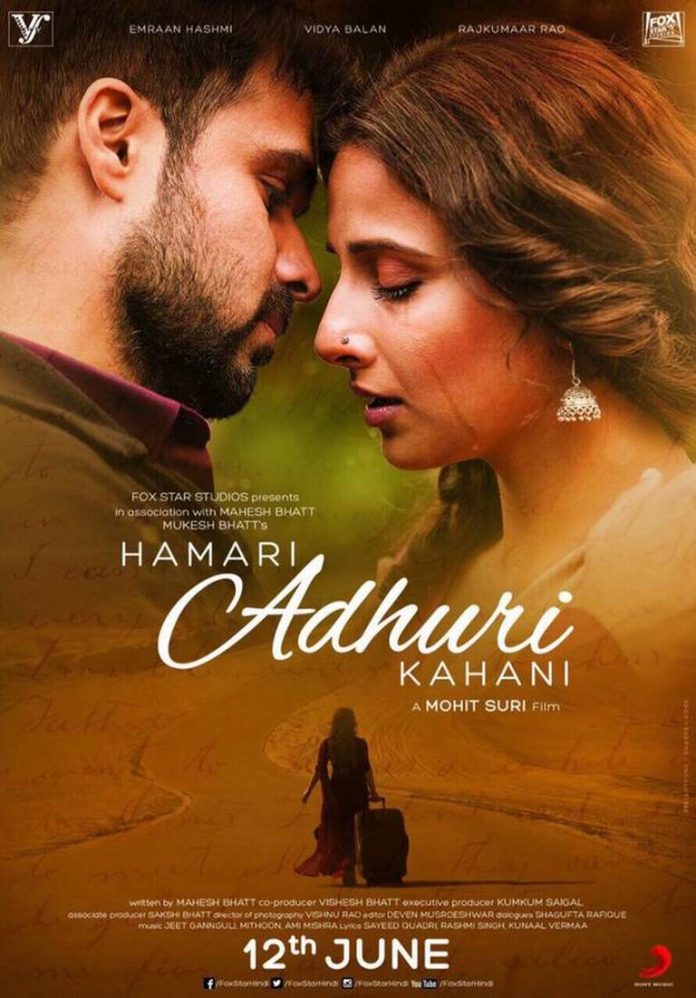 Mahesh Bhatt is a story teller and most of his films have been inspired from his real life and the latest offering from Vishesh Films – owned by brothers Mahesh, Mukesh & Robin Bhatt – is another saga from his life as it’s said to be the story of his father’s first wife Kiran. We all know that Mahesh Bhatt is the illegitimate son of producer-director Nanabhai Bhatt, a Gujarati Brahmin and prominent film maker of Hindi & Gujarati films in 40’s & 50’s, and Shirin Ali, a Bohra Muslim, who could not marry because of different religion and yet Nanabhai kept both wives and their families. Mahesh grew up in this atmosphere of animosity and drew inspiration to write and weave many stories on the subject of illegitimacy, religious divide and social taboos. Mahesh Bhatt was only 21 when he fell in love with 17 year old catholic Lorraine Bright and inspite of family objections, they both got married in an Arya Samaj ceremony and Lorraine became Kiran after converting to Hinduism, and the story became the inspiration of Mahesh Bhatt’s super hit film AASHIQUI (1985) where Rahul Bhatt & Anu Aggarwal reprised the roles of Mahesh & Kiran. Mahesh fell in love with Parveen Babi and the extra-marital affair resulted in Kiran walking out of the house and the story gave birth to acclaimed film ARTH (1982), where Shabana Azmi is the wife, Smita Patil is Parveen Babi and Kulbhushan Kharbanda portrayed Mahesh Bhatt. Mahesh Bhatt’s PHIR TERI KAHANI YAAD AAYEE (1993) & Mohit Suri’s WOH LAMHE (2006) are based on Mahesh Bhatt- Parveen Babi’s doomed affair and talked about Parveen Babi’s schizophrenia illness and the roles were convincingly played by Pooja Bhatt & Kangana Ranaut. Mahesh Bhatt’s NAAM (1986) talked about illegitimate child and KAASH (1987) was about marital woes. Kiran/ Lorraine walked away and Parveen Babi had moved away when Mahesh, while still married to Kiran with Pooja & Rahul Bhatt as kids, fell in love again to marry SONI RAZDAN after converting to Muslim faith and had Shaheen & Alia.

The father-daughter feud became the inspiration of DADDY (1989) where Anupam Kher & Pooja Bhatt reprised the roles of Mahesh & Pooja. Mahesh Bhatt’s last directed film ZAKHM (1995) was the story of his mother Shirin Ali & her husband Nanabhai Bhatt, where Pooja Bhatt & Nagarjuna were the parents and Kunal Khemu/Ajay Devgun are the young & adult Mahesh Bhatt. With his mother’s passing away, Mahesh decided to never direct again, however, the banner continued making films with younger members from the family like Vikram Bhatt, Mohit Suri, Milan Luthria (all nephews of Mahesh) & Pooja Bhatt and Emraan Hashmi (another nephew from Mahesh’s mother’s side), Alia & Rahul joining the acting ranks.

After the death of his mother in 1997, Mahesh became very close to his father until he passed away in 1998 and directed by Mohit Suri, HAMARI ADHURI KAHANI is the story of Nanabhai Bhatt’s first wife Kiran and the roles are reprised by VIDYA BALAN, EMRAAN HASHMI & RAJKUMAR RAO. We don’t know how many more stories Mahesh Bhatt will share in the coming years but certainly his life stories strike a chord with audiences and that explains the continuing popularity of Vishesh Films with the masses and if Hamari Adhuri Kahani becomes a hit, then surely Mahesh will find some more skeletons from his almirah in the years to come!!!

It was indeed a proud feeling for South Asians and Vancouvrites in particular as acclaimed Canadian director DEEPA MEHTA and well-known chefs VIKRAM VIJ & his wife MEENU DHALWALA , were conferred the honorary doctorate at SFU’s annual convocation. Deepa Mehta, who has made acclaimed films like EARTH , FIRE , WATER & MIDNIGHT’s CHILDREN amongst others , was honoured for her contribution in the world of cinema while Vikram & Meenu, the proud owners of VIJ’s, RANGOLI & MY SHANTI restaurants in the lower mainland, were honoured for being the ‘ Food Ambassadors ‘ of British Columbia and ASIAN JOURNAL joins all in congratulating the deserving recipients of this rare honor !!!

Dil Dhadakne Do is a winner!!!

Zoya Akhtar’s acclaimed film DIL DHADAKNE DO is a winner all the way as the critically acclaimed film started slow but picked up the steam and made over Rs. 60 Crores in the first weekend. After the success of PIKU & TANU WEDS MANU RETURNS, the multi starrer film did well in the overseas territories and drew enough people to be declared the third continuous bollywood hit abroad. Meanwhile, all eyes are on this week’s release of Mohit Suri’s HAMARI ADHURI KAHANI starring VIDYA BALAN, EMRAN HASHMI & RAJKUMAR RAO as many are predicting the film to do well . With Madhya Pradesh Govt. declaring the film TAX FREE and others to follow suit, it seems Mahesh Bhatt & Co. has another winner. If reports are true then SHAHID KAPOOR’s marriage would be celebrated in Greece as bollywood is getting ready for the big bash. of Shahid-Mira Rajput wedding. Rajkumar Hirani, Vinod Chopra & Aamir Khan threw a big bash to celebrate film PK’s Rs. 100 Crore collection in China , a rare first for any bollywood film , and almost all of bollywood was there to celebrate as Amitabh Bachchan , Ranveer Singh, Kangana Ranaut, Deepika Padukone, Sushant Singh, Anil Kapoor, Saurabh Shukla, Jackie Shroff and many more joined the celebrations. Singer MIKA SINGH was arrested and then released on bail in New Delhi for slapping a doctor in April and the case will now go to courts.

Nitin Mukesh presents a tribute to his father Mukesh!!!

MUKESH, one of the three pillars of Indian playback singing besides Mohammad Rafi & Kishore Kumar, died prematurely at the young age of 53 on August 27, 1976, and ever since, his son NITIN MUKESH took over and became the favourite of music directors like Laxmikant Pyarelal, Kalyanji Anandji, Rajesh Roshan & Shankar Jaikishan amongst others . The singing voice of popular actors like Anil Kapoor, Jackie Shroff & Shahrukh Khan in 80’s & 90’s, Nitin Mukesh has sung many popular songs during his illustrious career and toured various countries for many live concerts. In 2006, Nitin Mukesh embarked upon KAL KI YAADEIN, a live concert dedicated to the memory of his father MUKESH in North America and it was warmly received by all Mukesh fans, and 10 years after, Nitin Mukesh is bringing another live concert REMEMBERING MUKESH as he remembers his celebrated father on his 40th death anniversary. Presented by Kamal Sharma of KAMAL’S VIDEO PALACE & KVP ENTERTAINERS, Nitin Mukesh presents a tribute to his father MUKESH JI on SUNDAY, AUGUST 9nth at Bell Performing Arts Centre, Surrey at 7 PM and the tickets at $ 35,45,55,65 & VIP are already selling at KAMAL’S VIDEO PALACE, Surrey & Shaaz Video, Burnaby (604-439-0463) and can be bought online from www.vtixonline.com . So mark your calendars as this is a must for all those who love the classic golden melodies of 50’s,60’s & 70’sand don’t forget that  REMEMBERING MUKESH North American concert tour is in July-August,2015 and once again, NITIN MUKESH will be accompanied by the finest female singers & musicians of Mumbai film industry !

Is Santa buying new cell phones for the business this holiday...