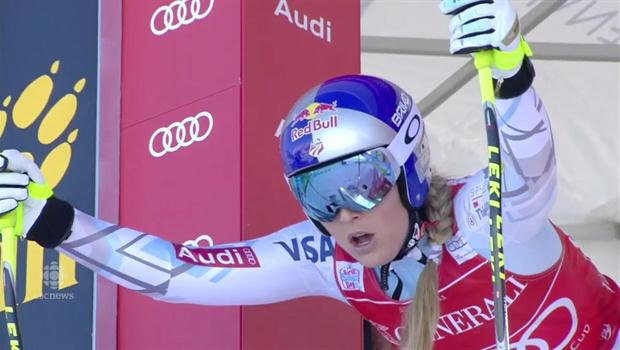 By Jerome Pugmire, THE ASSOCIATED PRESS

It was Yurkiw’s best World Cup result since finishing second in the downhill at the Italian resort of Cortina d’Ampezzo last January.

“I’m so happy, I made a few mistakes but it worked,” Yurkiw said. “The track was beautiful.”

Gut, who beat Vonn by just one hundredth of a second to win Friday’s super-combined race, edged Suter by 0.16 seconds on Saturday to secure her 15th career win and 23rd podium. Gut, who also won a giant slalom last month in Aspen, Colorado, pumped her fist with joy after crossing the line.

“I worked a lot on the video yesterday and it worked well for today,” the 24-year-old Gut said. “It’s no coincidence that I do well at Val d’Isere, it’s my third win at Val d’Isere. It’s like a breath of fresh air when I come here.”

Gut also won a downhill here three years ago and has a further two podium finishes in World Cups.

Chasing a fifth World Cup title, Vonn still holds the overall lead. But Gut is now only two points behind and has a great chance to go first with a strong performance in Sunday’s GS in Courchevel, a short trip away in the French Alps. The minimum requirement in terms of the points attributed would be for Gut to finish ninth and Vonn 10th _ which makes for a difference of three points scored.

“Everything goes so quickly,” Gut said. “There’s no point thinking about the overall now. The season’s still very long.”

She already holds the women’s overall record with 71 wins, having overtaken Moser-Proell’s longstanding mark of 62 last season, and has men’s great Ingemark Stenmark’s 86 victories in her sights.

Vonn looked well-placed to take the race lead when she went up on the inside of her left ski. She somehow kept her balance and stayed upright as she glided on her right ski.

The 31-year-old Vonn, who has recovered from a career-threatening knee and injury and two operations, did not stop to speak to reporters as she left the course but gave a small wave as she walked past.

“So I probably shouldn’t do that again,” Vonn tweeted later, along with a spectacular shot of her going airborne and another of her landing on her right ski. “Not feeling great. Going to rest and hopefully I will be able to race tomorrow.”

When Vonn first won a downhill race here 10 years ago, she was awarded the unusual gift of a cow, and when she won another cow after last year’s downhill win she called it Winnie.

Gut was also awarded a cow, but said she has not found a name for it yet. She plans to take it back to the Swiss canton of Saviese, where her physical trainer is based.

Suter’s last win was nearly four years ago, when she won a Super-G race at the Austrian resort of Bad Kleinkirchheim, and this was her 17th career podium, with six of those in downhill.

“At the top I was very nervous, I wanted to win but I knew it would be very difficult,” the 30-year-old Suter said. “Lara and Larisa were both very quick.”

Yurkiw, meanwhile, will be eyeing another podium at the Austrian resort of St. Anton on Jan. 9.