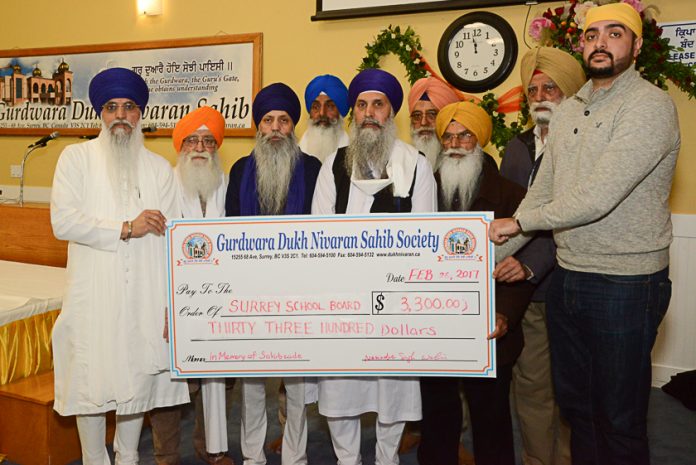 A gift in memory of two young boys who became martyrs over three hundred years ago, will enhance the work of Sophie’s Place Child & Youth Advocacy Centre in Surrey, an agency dedicated to helping children of all ages who are under the threat of, or suffer, physical, mental or sexual abuse.

This past week, the Members of the Gurdwara Dukh Nivaran Sahib presented a cheque for $18,000 to Sophie’s Place, from funds raised at the annual Sahibzaade event which celebrates the memory of two very courageous and strong young boys, martyred at the age of nine and six over 300 years ago.

“They were tortured beyond comprehension,” said Bhubinder Grewal, a society member who explained the event, “for refusing to renounce their religion. The brothers are among the most hallowed martyrs in Sikhism.”

“I’m telling you that December is a very hard month for us,” Grewal continued. “We do this annual fund-raiser every single year, to ensure that everyone knows what their values were, why they stood up for religious freedom, why they chose to die rather than convert to another religion.”

Grewal said that this remembrance was why Sophie’s Place was selected for their support.

“Sophie’s Place is a place for children that have been abused,” said Grewal. “This is something that we socially don’t talk about in the community, so it was very easy to line ourselves up with this organization.”

Steve Stew, a board member of Sophie’s Place, accepted the donation on behalf of the organization, named after their patron, Sophie Tweed-Simmons, which allows children and youth aged up to18 years of age, to report their experience of physical, mental or sexual abuse in a child-friendly space where they feel safe and welcome.

“We are humbled with the generosity of the temple and are privileged to know how much our work at Sophie’s Place honours this celebrated story of bravery and courage” says Judy Krawchuk, Director of Sophie’s Place. “Since 2012, our trained staff and law enforcement professionals have worked to ensure the children who come to us are heard, and their families have the support they need.” 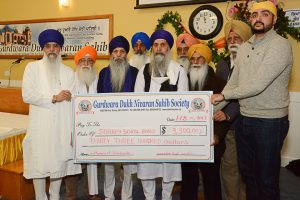 With one in three Canadian girls, and one in six Canadian boys being sexually abused before they reach adulthood, Sophie’s Place gives children a place to go where they can express what’s happened to them in a child friendly, safe environment. Since opening, over five hundred children have been supported by Sophie’s Place.

“Too many children are going to school hungry which is interfering with their ability to participate in school, impacting their ability to learn and become better members of society which is ultimately what we want,” said Bhubinder Grewal.

Each year, Sophie’s Place needs $150,000 to continue its work. Please help by making a donation today at http://the-centre.org/child-abuse/

BC steadily losing its work force to Alberta