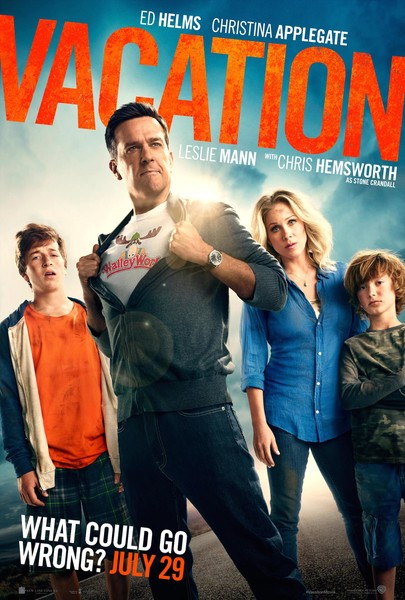 On the road again. Chaotic cross country trips can be challenging, taking off where the 1980s Vacation left off is the new Vacation. Similar studio Warner Brothers hopes to gets lots of mileage and traction with a new cast while snaring in those nostalgic for the first family affair at Cineplex Odeon theatres around B.C.
Gone is nerdy Chevy Chase (well, sort of) and in his stand is likeable Ed Helms (The Hangover). Though the famous Saturday Night Live alumnus does return briefly as Clark Griswold the action here centres on Rusty, the now not so young boy. Happily married to the fetching Christina Applegate the pair pack their bags and their two boys and venture west to take in the sights at Walleyworld.
Along the way comical encounters pile up. Funny in the extreme is a visit to part of their clan where a handsome Chris Hemsworth lets his guard down big time as a wacky weatherman who’s as vain as they come. Perhaps Hemsworth’s true calling is comedy and not the thunder of a The Avenger’s Norse God warrior Thor. Matched with Leslie Mann these relatives may in fact steal the show with their tomfoolery and uncontrolled zeal.
Less funny is a running bullying theme and the equally unsettling notion of pedophilia that somehow rears its head, albeit unintentionally.
Chemistry is good between Helms and Applegate and there really are a few flat out laugh out loud funny stupid scenes. Still this Vacation makes one long for the sweetness of the original.
Vacation (PG) ***

Verdict in arms case against Salman on Jan 18