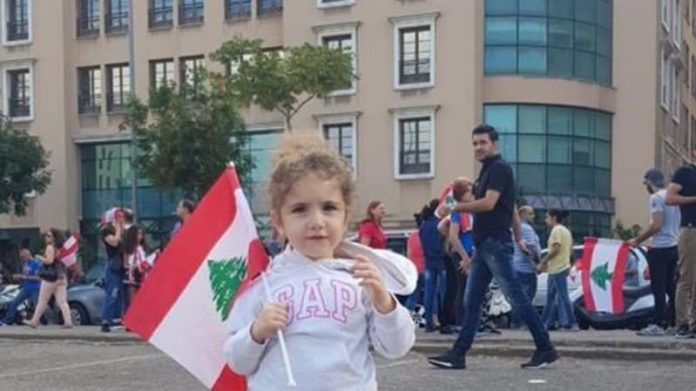 When three-year-old Alexandra Naggear’s mother saw an explosion through her window in Lebanon, she scooped up her little girl and tried to run into the next room.

But it was too late.

Alexandra, a Canadian citizen, suffered a head injury from the impact of the explosion in Beirut on Aug. 4, and died in hospital three days later, said her grandfather Michel Awad. Awad and his daughter are also Canadian.

“The power of the explosion blew them inside the house. My daughter was trying to cover Alexandra, but the explosion was extremely powerful,” he said in a phone interview on Sunday. “They were blown by the intensity of the explosion and they hit something  probably a wall or a door.”

Two Canadians were among the 180 people killed in the explosion, officials have said. Prime Minister Justin Trudeau offered his “deepest condolences” to the family and friends of them both. More than 6,000 people were wounded and at least 30 are still missing.

Awad described his granddaughter as an “amazing baby” who was smart, funny and full of life.

On the day of the explosion, he said, Alexandra was playing at home with her parents and a friend. The home, which overlooked the port, was not even two kilometres away.

His daughter saw the first explosion and went to the window, he said, when she heard a whistling sound.

She screamed and asked the others to move away from the window, Awad said.

“And they ran inside,” he said. “It was just like a fraction of a second before the second huge explosion took place, and they were blown inside the house.”

His daughter suffered a broken hand along with other injuries, Awad said, adding that his son-in-law was also injured.

At that same moment, Awad said he was sitting on the balcony of his house that is shaded by a row of pine trees, roughly an hour’s drive from the port.

“I just saw those huge pine trees bending bending towards the balcony when you have this tornado or a storm. Then I felt this release of hot air, and I heard the explosion.”

But he said he’s angry and regrets moving back to Beirut in 1994, which he said they did for various reasons, including work.

The cause of the fire that ignited nearly 3,000 tons of ammonium nitrate stored at Beirut’s port remains unclear. Documents have emerged showing that the country’s top leadership and security officials were aware of the chemicals that had been stored there for years.

The little girl, who was born on Jan. 28, 2017, filled a void in her mother’s life, her grandfather said. But now, the family wants to move back to Montreal and start anew.

Alexandra’s parents are feeling “terrible” and are in shock, Awad said.

His granddaughter’s new best friend was their yellow Labrador named Stella, and she liked listening to Sleeping Beauty and other fairy tales with the dog, he recalled.

The little girl called him Jido Michlo, which means Grandpa Michel in Arabic. And he called her Hayeti Lexuti meaning, my whole life. Her funeral was held Aug. 8.

A couple of days before the explosion his granddaughter was starting to learn how to ride her bicycle.

“The best time we had was teaching her how to ride the bicycle,” he said. “And it was red because red was her favourite colour.”

She had also lately acquired a taste for local dishes but “loved” burgers with French fries, Awad said, adding he spent days and sometimes weeks with his granddaughter because her parents had to travel for work.

“Being with Alexandra was pure luxury,” he said. “Every single moment.”

By Hina Alam
The Canadian Press