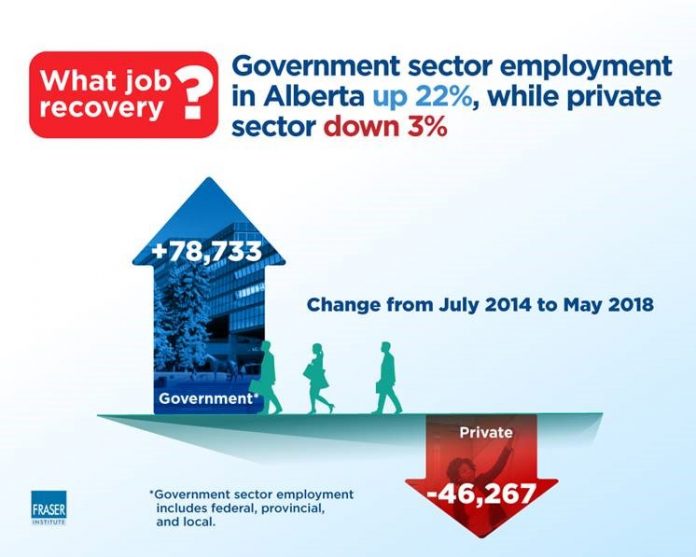 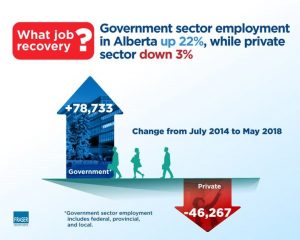 Calgary: Alberta’s employment growth over the past four years is being driven by nearly 79,000 new government jobs, while the private sector has shed more than 46,000 jobs over the same period, finds a new study by the Fraser Institute, an independent, non-partisan Canadian public policy think-tank.

The study, The Illusion of Alberta’s Jobs Recovery: Government vs. Private Sector Employment, finds that government employment in Alberta—including provincial, municipal and federal jobs—increased 21.5 per cent between July 2014 and May 2018 (the latest month of data at the time of writing), an addition of 78,733 new government jobs.

As a result, the government sector’s share of total employment (excluding the self-employed) increased from 19.5 per cent to 23.2 per cent—the highest it’s been since 1994.

Crucially, the growth in government employment is not necessarily a result of low commodity prices or the recent recession. In fact, in neighbouring Saskatchewan, government employment grew only 2.1 per cent over the same period—or one-tenth the rate of Alberta—even though both jurisdictions depend on energy and both were hurt by the drop in commodity prices in 2014.

“The reality is government jobs are driving Alberta’s employment growth while private-sector employment is shrinking, and that is not sustainable,” Lafleur said.