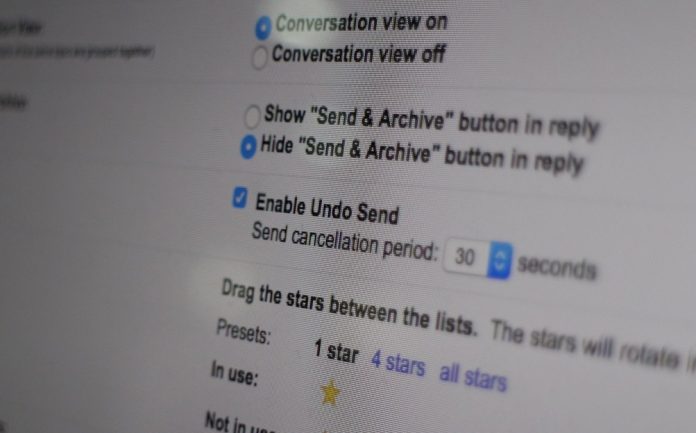 TORONTO: It might be called “send regret,” that panic that sets in after firing off an email or text that you suddenly realize was inappropriate, addressed to the wrong person, or just plain wrong.

Google is trying to save Gmail users from their own misguided missives by granting them a window of sober second thought.

Gmail users can now add the “undo send” feature to their accounts and give themselves up to 30 seconds to recall an ill-conceived email.

“I’ve been known to press send a little too quickly. Sometimes, it’s as simple as fixing a typo or making sure you’re not replying-all, which can be awkward.”

The feature has been available to beta-testers of Gmail since 2009 and proved so popular that Google decided to roll it out this week for all its 900 million-plus users worldwide. It has also been an option for users of “Inbox,” an enhanced Gmail application.

“I think everybody is kind of vulnerable to this,” Brindle said of fretting after a fast-fingered click on the send button.

“Anything we can do to alleviate those sudden moments of panic when you’re using one of our products is a good thing.”

Aimee Morrison, an English professor who specializes in new media studies at the University of Waterloo, said other email providers will likely have to follow Google’s lead and add the undo feature to their programs. Users will demand it, she predicted.

“I think we’ve all had that experience of clicking send, then repenting the decision,” said Morrison, recalling how an acquaintance once sent a business email intending to sign off with “Best regards.”

The sender accidentally typed a “t” instead of a “g” in regards, but realized the mistake too late.

“There’s nothing you can do, it’s gone. It’s like dropping it into the mailbox on the corner and hearing the lid slam.”

_ In the web-based version of Gmail, tap on the “settings” icon that looks like a gear.

_ Select “settings” from the drop-down menu.

_ Under the “general” settings tab, click on “enable undo send.” Users can choose a delay of five, 10, 20 or 30 seconds before a message is sent out and cannot be retracted.

_ Click the “save changes” button at the bottom of the page.

“For me personally, I’m a 30-seconds guy,” said Brindle. “I need to reflect on it sometimes. Five seconds can be a little bit tight.”

Once “send” is pressed on an email, a yellow bar appears at the top of the screen, saying the message has been sent and offering the option to undo that transmission.

“Undo send” is a welcome Gmail addition for Murray Rowe of Toronto, who enabled the feature Wednesday after hearing about it on TV.

When Rowe wished he could have recaptured delivered emails in the past, it wasn’t because of the content of the communication, but how he’d phrased it.

“That’s probably 99 per cent of the time when I’ll use it, when I’m like: ‘Oh, that tone was a bit too assertive, too direct.

“On a professional level, I would say there were times where I’d think: ‘This is going into a file. Could that tone be misinterpreted?”’

And like Brindle, Rowe also opted for a half-minute window to linger over second thoughts about the email being sent.

“Five seconds is not a lot of time.”

In some cases, even half a minute won’t be enough, suggested Morrison.

“Most of these emails that we regret sending, we don’t regret within the first 30 seconds,” she said.

“What this won’t help with is waking up the next morning having sent an ill-advised email telling your parents what you really think about their religious beliefs.

“This won’t save us from emails composed in haste…. The only cure is to compose a little more at leisure and not make use of that instantaneous nature of the medium.”

Her advice: when formulating an important email _ such as one applying for a job, communicating with one’s boss or dealing with an emotionally charged situation _ write a draft, walk away and do something else, then come back and reread it before hitting send.