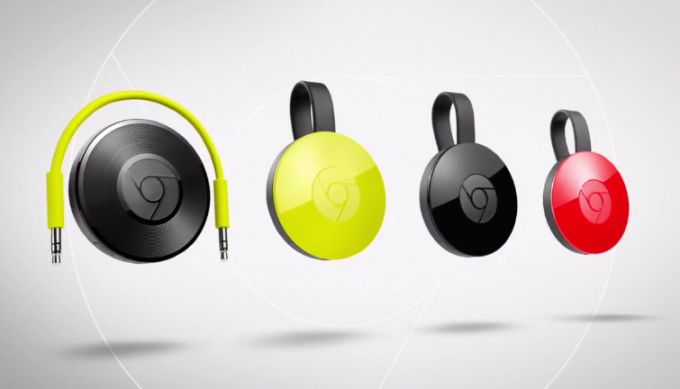 San Francisco, Sep 30 (IANS) Google’s chief executive Sundar Pichai took to the stage on Tuesday to launch two new Chromecast streaming gadgets, one for streaming video and photos to a TV, and another one for streaming music to any audio entertainment hub or standard speakers.

The second generation video Chromecast, which has nearly sold over 20 million devices globally, has undergone a design change to look like a carrom striker with the HDMI cable sticking out from one end.

Google explained the design change to make the device more minimalistic in order to avoid cluttering at TV USB ports.

The new streaming device comes with three Wi-Fi antennas supporting the newer dual-band Wi-Fi 802.11ac version which Google claims will provide a “more robust, high quality streaming experience for less buffering than you would have found previously with the Chromecast”.

The new Chromecast Audio operates in a similar manner to the video version of Chromecast, but connects to a pair of speakers or a hi-fi via a 3.5mm line out, optical out or standard phono (RCA) jacks.

“We’re trying to do for hi-fi what we’ve done with the TV – turn your hi-fi into a smart hi-ii,” said a Google spokesperson.

“If you’re used to using apps on your smartphone then using the Chromecast should be easy, as all the processing and control is done on the phone,” he added.

The Internet gaint said that it is also working on multi-room audio streaming using the Chromecast Audio and announced upgrades to the Chromecast app.

Both the new Chromecasts are powered by a microUSB cable and will be available in the next week costing $35.