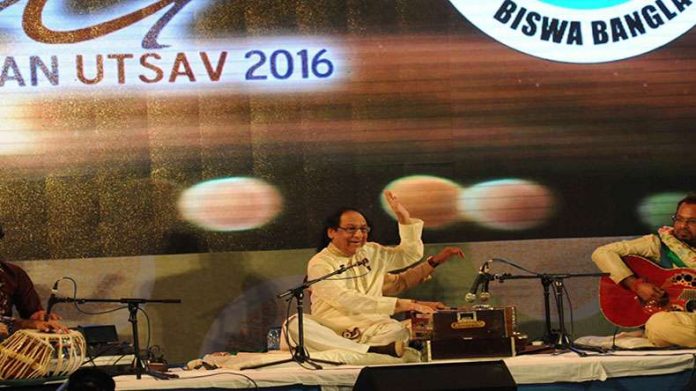 Kolkata, Jan 12 (IANS) Pakistani ghazal maestro Ghulam Ali, who has over the years enthralled millions across the globe with his baritone voice, on Tuesday expressed gratitude and elation as he performed to a packed audience in the eastern metropolis, three months after cancellation of his concert in Mumbai.

“I am very happy today. I have been coming to Kolkata for 30 to 35 years. But this time it feels like I have come back after 50 years. I was so sad and today my sadness ends,” Ghulam Ali said at the start of the concert at the Netaji Indoor Stadium here.

Performing with his son Aamir, Ghulam Ali hailed West Bengal Chief Minister Mamata Banerjee as a form of Saraswati, the Hindu goddess of wisdom and music.

“I am grateful to her. She has done us a favour in the form of Saraswati,” Ghulam Ali said with a smile.

Banerjee reinforced her views on universal brotherhood and requested the 75-year-old singer to visit the city again. She welcomed him with a shawl and a scarf.

The maestro had first performed in Kolkata in 1981.

“Gana wana mujhe nahi aata (I don’t know how to sing). I only know how to listen,” he said, reminiscing how he was tutored by the legendary Bade Ghulam Ali and his three brothers.

“I used to be after them (to learn),” quipped the singer, whose famous ghazal renditions are “Chupke Chupke Raat Din”, “Kal Chaudhvin Ki Raat Thi”, “Hungama Hai Kyon Barpa”, “Kiya Hai Pyar Jise” and many others.

Attired in embroidered white kurta-pajamas and a shawl, Ali complimented the audience for their patience and silence as they immersed themselves in his shayaris and ghazals including the famed “Dil Mein Ek Lehar Si Uthi Hai Abhi”.

Banerjee was seen absorbed in the music with closed eyes as Ali entranced the audience with his expertise in vibrations.

The ustad’s arresting style conveyed a range of emotions, even as he rendered the same couplet more than once.

Music transcended geographical and political boundaries as Ali rendered the famed “Chupke Chupke Raat Din” in his inimitable style — in a duet with son Aamir — to thunderous applause.

The icon with effortless ease slipped into the popular rendition about an hour into the concert.

Spectators, which included the creme de la creme of Bengal, seemed to be overwhelmed with a strong dose of nostalgia, when Ali began “Chupke Chupke”.

Filmmaker Mahesh Bhatt, who recently roped in Ali to sing for his play titled “Milne Do”, was also in attendance.

There was never a dull moment as the ustad kept up an engaging conversation with the audience through explanations for the shayaris and ghazals he sang, in his characteristic lively and jovial demeanour.

Ali said he performs all over the world but enjoys most while performing in Kolkata.

However, a section of Twitterati, including BJP leaders, slammed Banerjee for inviting the singer to India just weeks after the Pathankot attacks.

“Due to Confidence Building Measures like #PathankotAttack, Ghulam Ali will perform again in Kolkata (after saying he won’t be back ever),” said a Twitter post, taking a dig at the concert.

On the other hand, there was also support on the microblogging platform.

After cancellation of his Mumbai concert in October due to threats by the Shiv Sena, Ghulam Ali had expressed disappointment asserting “never to return to India”.

Banerjee offered Kolkata as a venue following the cancellation of the Mumbai concert in October.

Frozen is the new fresh: India a slow starter