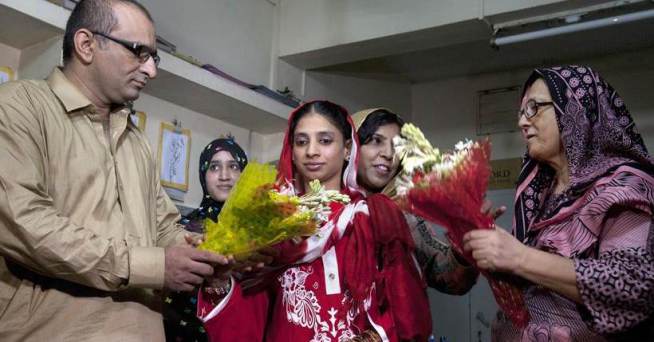 New Delhi, Oct 26 (IANS) Geeta, a young speech and hearing impaired Indian woman left stranded in Pakistan for over a decade, arrived here on Monday morning as India said repatriation of mentally ill prisoners lodged in jails on both sides of the border would be taken up with Islamabad.

Prime Minister Narendra Modi offered Rs.1 crore to Pakistan’s Edhi Foundation for taking care of Geeta, whereas External Affairs Minister Sushma Swaraj thanked the Pakistan government and the non-governmental organisation that took care of the young woman all these years.

“I don’t think any amount of words are enough to thank the Edhi family for taking care of Geeta. They are apostles of kindness and compassion,” Modi tweeted.

“What the Edhi family has done is too priceless to be measured but I am happy to announce a contribution of Rs.1 crore to their foundation,” Modi said.

“I thank the government of Pakistan and the NGO that took care of Geeta in Pakistan all these years… I thank them from the bottom of my heart,” Swaraj said at a press conference here, where Geeta was also present.

The Edhi Foundation is a non-profit social welfare programme in Pakistan, founded by Abdul Sattar Edhi in 1951. He is popularly known as Pakistan’s “Father Teresa”.

Sushma Swaraj said nobody in Pakistan forced Geeta to either change her religion or food habits and instead helped her follow her earlier lifestyle.

The issue of mentally ill prisoners languishing in jails of India and Pakistan needed the attention of the two governments, the minister said.

“There is a need to be proactive on this (issue),” Sushma Swaraj said, adding that now that Geeta was back in India, she would take up with the Pakistan government the case of repatriation of mentally challenged prisoners lodged in jails on both sides of the border to their respective countries.

Geeta kept on smiling all through the press meet at the external affairs ministry office in New Delhi.

“Welcome back home, Geeta” said the prime minister, as Geeta embraced him warmly.

“It is truly wonderful to have you back home. Was truly a delight to spend time with you today,” he said.

The prime minister assured Geeta that every effort would be made to trace Geeta’s family, and that she would be looked after well.

“All of India will take care of you,” Modi said.

According to the Pakistan High Commission here, Geeta came to Delhi by Pakistan International Airlines flight 272 and was accompanied by members of the Edhi Foundation.

Geeta was received by high ranking Indian and Pakistani officials as she landed at the Indira Gandhi international airport here at 10.30 a.m. on Monday. She was taken to the external affairs ministry directly from the airport.

Two of her brothers and a sister-in-law were also present at the airport. The brothers were accompanied by their lawyer Mohammad Momin.

Geeta, now in her early 20s, was about 11 years of age when she inadvertently crossed into Pakistan in 2003. She was spotted by the Pakistan Rangers in Lahore, and was handed over to the Edhi Foundation, a social welfare organisation that has looked after her since then.

Bilquis Edhi, who runs the Edhi Foundation, named her Geeta.

Though the Pakistan High Commission was to hold a reception for Geeta in the evening, it was cancelled after a high intensity earthquake emanating in Afghanistan also hit Pakistan on Monday afternoon.

High Commission media incharge Manzoor Ali Memon said Salman Khan-starrer Hindi film ‘Bajrangi Bhaijaan’ had nothing to do with Geeta’s homecoming as the process for her return to India was initiated much earlier in 2012.

“It’s a message of love and affection between the two countries and has nothing to do with the movie,” he said.

Meanwhile, the Pakistan government said Geeta was looked after well in the country and hoped that India would now free Pakistanis lodged in Indian jails.

“During her stay in Pakistan, Geeta was looked after by world renowned philanthropist Abdul Sattar Edhi and his family,” Pakistan’s ministry of foreign affairs said in a statement.

“Indian national Geeta left Karachi for New Delhi today (Monday). Her return was facilitated by the government of Pakistan,” it said, adding that they “wish Geeta well”.

“Hope Pakistani prisoners would be released (by India) as soon as possible so that they come and stay with their families for the rest of their lives,” Memon told reporters here.

B.C. government to intervene in National Energy Board reconsideration