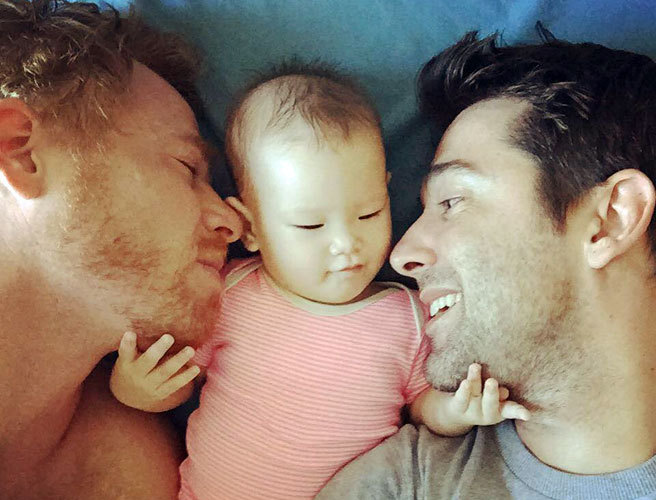 Bangkok, July 29 (IANS/EFE) Gordon Lake smiles as Carmen’s little fingers cling to his thumb. For the past six months he has been waiting, terrified that Thailand’s social services will separate him from his daughter but asserting he will never let that happen.

Lake, born in the US and his Spanish partner, Manuel Santos have been “struggling” since early 2015 to leave Thailand along with little Carmen, born on January 17.

After her birth, the surrogate mother refused to give Carmen away.

“Since the first day, we have been in constant fear of being kept away from our own daughter,” Lake told EFE.

“According to Thai law, I have no legal rights over her despite being her biological father,” which makes her a US national too, he adds.

The couple’s dream of expanding their family turned into a nightmare when Patidta Kusolsang, the woman who gave birth to Carmen, failed to show up at the US embassy in Bangkok to sign the paperwork required for processing the baby’s passport, days after her birth.

The Thai woman has since then claimed rights over the little girl.

In 2014, the couple Lake-Santos, who have a two-year-old son through a surrogacy process in India, opted for Thailand to expand their family, based on the “excellent” experiences reported by other couples.

For their second child, the couple, married in Valencia in 2012, contacted a woman through an agency, who agreed to become the surrogate.

After the military coup in the country, with two controversial surrogacy cases surfacing in the middle of the year, the consolidated structure of this service, which took much advantage of loopholes in the law, is now in a complete mess.

The military junta has closed clinics in Thailand and enacted new laws, which will be implemented by July-end.

“When problems arose, we wanted to talk to the surrogate mother to show our full support, we even offered her to come to Spain and give birth there. But she refused, however she appreciated our gestures via e-mail,” said Lake, watching little Carmen smile from her crib.

Although the surrogate mother acknowledged Lake as the father of the baby, being a single mother local laws do not grant parental powers to the male.

During the first meeting with the lawyers and representatives, the Thai woman expressed her fears about the little girl’s future being raised by “parents who are not normal”, a reference to the sexual orientation of the couple, according to Lake.

“That’s the first of the many lies that the surrogate mother then went on to tell,” says the biological father.

The surrogate mother’s representative accused the couple of being human traffickers on March 5 during an appearance in the local media.

Moreover, over a month ago, Patidta also lodged a complaint against Lake for child abduction.

“We are cooperating with the authorities 100 percent,” Lake said.

The father added that from the beginning they wanted to avoid the media and reach an agreement amicably, but facing repeated attacks, they chose to deny all accusations made against them by providing evidence through social networking sites.

After an explosion in the local and international media, Carmen’s father emphasises the “incredible” mobilisation of Thai people in favour of his cause through Facebook groups that investigated the surrogate mother’s information.

“We won’t leave from here without our daughter,” Lake said.

And despite the trouble she is causing them, he still wants to thank Patidta for giving birth to little Carmen.