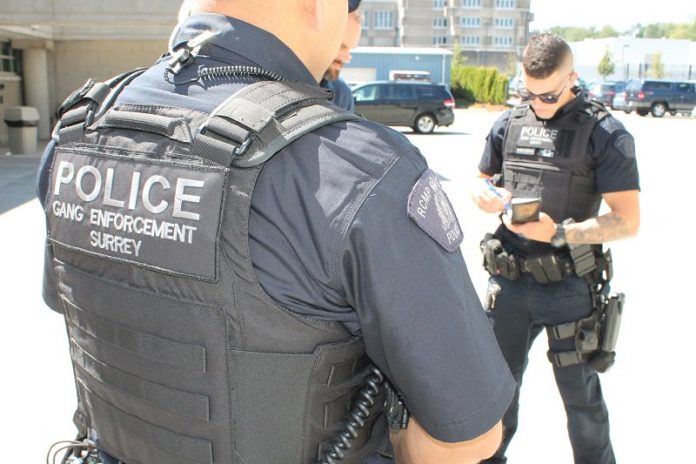 Surrey: The recent expansion of the Surrey RCMP’s Gang Enforcement Team (SGET) is already having an impact on individuals within Surrey who are associated to organized or criminal gang groups.

Since the SGET expansion was announced on July 3, in the Mayor’s Task Force on Gang Violence Prevention report, Surrey RCMP Officer in Charge, Assistant Commissioner Dwayne McDonald, has assigned a number of additional Surrey RCMP officers to the detachment’s gang team. SGET officers have been ramping up their enforcement and making life uncomfortable for those associated to gangs.

In the two weeks since the team’s expansion, SGET officers have completed 89 streets checks which included 188 people and 74 vehicles believed to associated to gang activity. As a result, 35 violation tickets have been issued, 7 charges have been laid, and 1 vehicle has been seized along with various intelligence on multiple individuals captured.

Our increased presence is definitely being felt by those individuals involved in gang activity and the local drug trade, says S/Sgt. Mike Hall, Acting Proactive Enforcement Officer. In coordination with multiple units, our Surrey Gang Enforcement Team is actively targeting those individuals who pose high risks to public safety in Surrey. Through a combination of overt observation and interaction, and enforcement, our goal is to make them realize their illegal activities and associated violence are not welcome in our city.

The expansion of SGET has also allowed officers to spend more time liaising with families and individuals and youth who are trending towards gang affiliations. Additional officers are also being trained on delivering the Shattering the Image presentation as more requests come in for this successful gang prevention program. This summer SGET officers have also been involved in the Wrap program and they have accompanied at-risk youth on recreational outings.

A new Inadmissible Patrons Program is also being developed by SGET to discourage and deter violent criminal activity in and around licenced establishments in Surrey. The program, which will be launched later this year, will allow police to remove inadmissible patronsfrom participating establishments. These will include individuals whose lifestyle, associations and activities pose a risk to public safety, either directly or from third parties.

Since 2015 our shots fired files have decreased but, as those involved in gangs continue to change their tactics, so must we, says Assistant Commissioner Dwayne McDonald. Our service delivery model allows us to quickly deploy members to different teams to respond to the needs of the community. The expansion of our Surrey Gang Enforcement Team, the forthcoming Inadmissible Patrons Program, and our continuing efforts in gang prevention and community outreach show the dedication and commitment of our officers and support staff in combatting this issue.