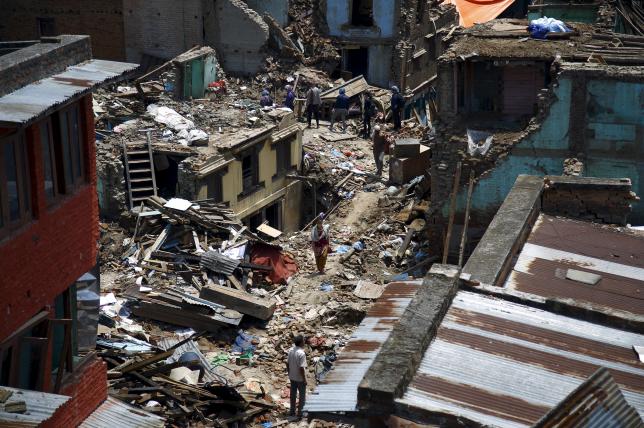 Kathmandu/New Delhi, May 12 (IANS) At least 57 people were killed and over 1,000 others injured when a massive earthquake and 14 aftershocks shook Nepal on Tuesday causing panic in the Himalayan nation which is still recovering from the devastating April 25 temblor.

Ten people were killed in the states of Bihar and Uttar Pradesh in adjoining India.

Cracked buildings collapsed in a heap of debris and landslides cut off roads as an earthquake measuring 7.3 on the Richter scale hit Nepal, with its epicentre not far from Mount Everest — the world’s highest peak at 8,850 metres.

Nineteen people were killed in Dolakha, five in Sindhupalchok, four in Kathmandu, two in Sindhuli and one each in Lalitpur, Sunsari, Rauthat, Dhanusa and Sarlahi, Nepal home ministry spokesperson Laxmi Prasad Dhakal said.

The details of the other people killed were not immediately available.

Terrified people ran out of homes and offices to open spaces and parks as the buildings began to shake due to the tremors.

“It was frightening,” said a witness who clutched her daughter. “It felt worse than last time,” she added.

Six strong aftershocks followed in quick succession. Four of the aftershocks had their epicentre at Kodari on the Nepal-China border, northeast of Kathmandu, and the strongest aftershock measured 6.3 on the Richter scale.

His Indian counterpart Narendra Modi assured that he has directed authorities to be on alert for rescue and relief operations.

A tweet from the Indian prime minister’s office said: “PM took stock of the situation following the fresh major earthquake felt in Nepal and parts of India, at a high-level meeting.”

In Kathmandu, a witness said he saw a building collapse.

Onlookers were left dazed and distraught on seeing the buildings collapse with a roar in a replay of the April 25 quake horror.

There was no electricity in Kathmandu after the tremors. Internet connectivity too snapped.

Thousands of people set up tents in open spaces. Some people were seen sitting on the middle of roads, afraid to go back to their homes.

Kathmandu airport was closed temporarily as the ATC staff hurried out of the tower. The airport — Nepal’s only international airport — was shortly thereafter reopened for normal traffic.

The tremors were felt across India for over 30 seconds, leaving at least eight people dead in Bihar and two in Uttar Pradesh. The National Disaster Response Force (NDRF) was put on alert for rescue and relief operations.

The quake shook Nepal, nearly three weeks after a more powerful temblor killed over 8,000 people in the Himalayan nation. The tremors were also felt in parts of northern and eastern India including Delhi, Patna, Lucknow, Guwahati, Bhubaneswar and Jaipur.

In Bihar, at least eight people, including three children, were killed.

A labourer was killed when an under-construction wall collapsed in Danapur near Patna. A child in Siwan district, two children in Manigachi in Darbhanga district and a woman in Dumra of Sitamarhi district died in similar circumstances.

One person each died in Hajipur in Vaishali district, Nawada and Saran districts.

Bihar Chief Minister Nitish Kumar, who directed officials concerned to assess the damage, however confirmed only six deaths, but said there was information on 15 and officers had been asked to verify these.

In Uttar Pradesh, two people were killed and half-a-dozen others injured.

A labourer was killed when an under-construction crematorium in Hamirpur collapsed while several other labourers were trapped in the rubble, while a girl was killed in Sambhal when her mud-and-thatch house caved in.

She said a round-the-clock control room had been opened at the state secretariat ‘Nabanna’ in nearby Howrah. The numbers are 1070 and 22143526.

Kolkata Metro as well as Delhi Metro services were halted due to the tremors.