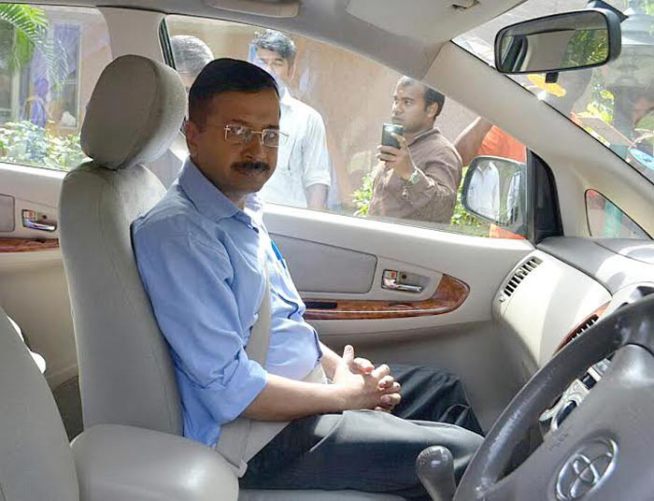 After landing on an Air India flight, the Aam Aadmi Party (AAP) leader gave journalists the slip by avoiding the VIP exit where they were massed in large numbers.

Kejriwal took the exit used by other passengers, got into a car and headed home on the outskirts of Delhi, an informed source said.

The 46-year-old is expected to resume work on Tuesday. An official in the Delhi government told IANS: “This week is going to be a really busy one as there are several decisions which need his approval.”

Kejriwal’s focus would also be on the affairs in the AAP, which has been torn into two factions, one of his loyalists and the other led by Prashant Bhushan and Yogendra Yadav, both senior leaders.

Earlier, doctors at a private hospital where Kejriwal was treated said he had overcome his nagging cough and his blood sugar was now under check.

The chief minister was admitted on March 5 to the Jindal Naturecure Institute.

Before leaving the hospital, Kejriwal told the media that he was feeling “fresh and fit” and was excited to return home.

“My cough and blood sugar level are under control now. I am feeling fresh and fit after treatment at Jindal,” Kejriwal said.

He said he was relieved to be free from months of coughing and high blood sugar as they affected his health and work.

“I am looking forward to be at home with family by night and resume work soon,” he said.

“I have been told to strictly keep away from aerated drinks and oily food. I have learnt a lot about the importance of diet, rest and regular exercises to stay fit and remain healthy.”

Kejriwal declined to comment on the crisis in the party, saying he was pre-occupied with the naturopathy treatment and had no time to discuss the issues with his colleagues in Delhi or Bengaluru.

Kejriwal was accompanied by his parents Gobind Ram and Gita Devi, who too got treated for age related symptoms.

Asked about the cost of the treatment, Kejriwal said he paid the bills from his own money and won’t seek reimbursement from the Delhi government.

According to hospital sources, Kejriwal was billed Rs.17,000 a day for accommodation in a three-bed room cottage ‘Nest’ located in the midst of the sprawling institute campus on the Bengaluru-Pune National Highway.

Doctors have advised him to maintain a strict diet, take food at the prescribed hour and go to bed early and to get up early.

Kejriwal was earlier treated at the institute when he came with social activist Anna Hazare in February 2012. He then had high blood sugar level but no cough.

He then stayed there for 16 days and followed a nature cure regime, diet and treatment instructions meticulously. On discharge, his sugar level was within normal limits without medication,” a doctor recalled.

But in the last three years, Kejriwal failed to maintain the lifestyle changes.

Preliminary tests on March 5-6 showed that Kejriwal’s faulty and stressful lifestyle, including consumption of aerated drinks, irregular eating habits, high level of pollution in Delhi and accumulation of toxins in his body had resulted in chronic cough and high blood sugar.

The institute has advised Kejriwal dietary changes and daily practice of prescribed yogasana, pranayama and kriya — a form of breathing technique to cleanse the inner body.