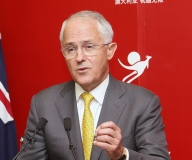 Sydney: Former Australian Prime Minister Malcolm Turnbull on Friday retired from politics and resigned from Parliament, a week after losing the leadership of the Liberal Party and the premiership due to an internal crisis in the party.

Turnbull wrote a farewell letter to his constituents in Wentworth that was published on Facebook, Efe news reported.

“It has been at times a wild ride, but together we have achieved an enormous amount. I am very proud, especially, of the achievements of the government over the past almost three years,” he said.

Prime Minister Scott Morrison, who is on an official visit to Indonesia, said in Jakarta that Turnbull would be well-remembered and had done a lot for Australia.

“You’ve served our country well, and on behalf of our country as Prime Minister, I just want to say thanks,” Morrison told reporters according to the AAP news agency.

Morrison, the former treasurer under Turnbull who assumed office on Aug 24, highlighted a hydroelectric project and the plan to construct a second airport in Sydney as major achievements of his predecessor’s government, but did not mention the legalization of same-sex marriages – which Morrison had opposed – during Turnbull’s tenure.

Turnbull’s resignation from Parliament, where the Liberal-National coalition has just a one-seat majority, will lead to a by-election for his seat.

Morrison was elected as leader of the Liberal Party after a second internal vote in a week, holding off challenges from Home Minister Peter Dutton and Foreign Minister Julie Bishop.

The crisis in the party surfaced on August 20, with the charge against Turnbull led by Dutton and supported by former Prime Minister Tony Abbott, who was replaced by Turnbull in 2015.

Internal power struggles and leadership changes have become frequent in Australian politics during the last decade in both Labour and Liberal-National governments.

Internet access key to get next billion online: Zuckerberg