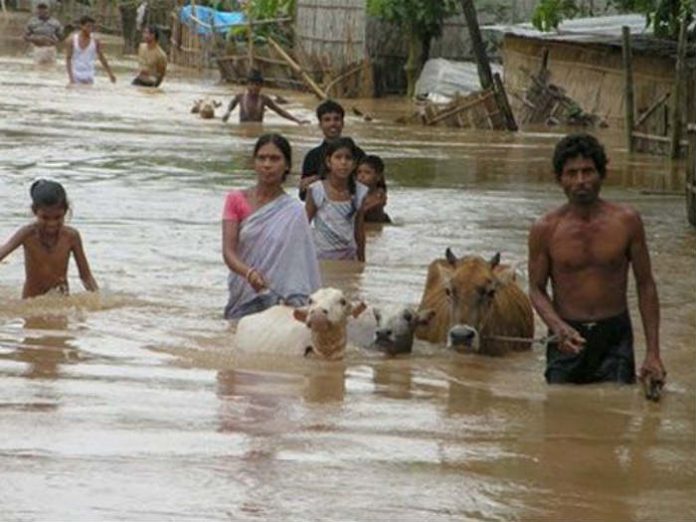 Guwahati, Aug 31 (IANS) The flood situation in Assam has deteriorated again, affecting 4.64 lakh people in some major towns and more than 1,000 villages and causing widespread destruction, officials said on Monday.

The Assam State Disaster Management Authority (ASDMA) said the situation was serious in Dhemaji, Dibrugarh and Tinsukia districts in eastern Assam, where more than 700 villages remained submerged for the last two days.

Most areas in Tinsukia and Dibrugarh towns also remained submerged due to flash floods since Sunday, officials said.

The ASDMA could not confirm reports that five people, including a child, were washed away by the flood waters.

A total of 662 villages are submerged in Dhemaji district.

Around one lakh hectares of crop land are under water, ASDMA officials said, adding that relief and rescue operations had been stepped up in all the affected areas.

While the Brahmaputra is flowing above the danger level in Dibrugarh, Jorhat and Dhubri, the Ranganodi river has breached the danger mark in parts of Lakhimpur district.

Similarly, the Jia Bharali is flowing above the danger level at Sonitpur.

Other rivers which have risen menacingly include Puthimari and Beki in lower Assam and the Kushiara in Karimganj district.

Authorities in Tinsukia, Dhemaji, Lakhimpur and Dibrugarh have shut down educational institutions.

With the Brahmaputra’s rising level in Jorhat, the administration has closed the ferry service between Nematighat and the river island Majuli.

The ASDMA said that roads and bridges had also been damaged in Dhemaji, Lakhimpur, Tinsukia and Cachar.

Modi poses for pictures, mobbed at Navy chief’s ‘At Home’