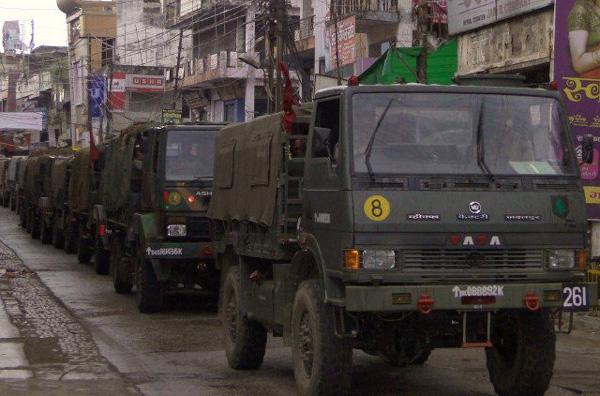 Ahmedabad, Aug 26 (IANS) Five people were killed, and over 100 injured as a statewide shutdown in Gujarat called by the Patidar Arakshan Andolan Samiti turned violent on Wednesday, officials said. Riots, arson, stone-pelting and widespread damage to public and private property forced the authorities to call the army and paramilitary forces.

“Three people were killed in Ahmedabad and two in Banaskantha in firing by the paramilitary forces while attempting to control rioting mobs,” an official at the Gujarat State Police Control told IANS.

At least 100 people were injured in violence, mainly in group clashes and stone-pelting incidents, in the state from where Prime Minister Narendra Modi hails.

At least 49 companies of the armed forces were stationed in Ahmedabad where nearly 1.2 million Patidars had taken out a rally on Tuesday demanding caste-based reservation in education and jobs.

Similarly, 10 companies were stationed in diamond polishing hub Surat, which saw riots, arson and looting of shops and commercial establishments on Wednesday.

Overnight curfew imposed in many cities failed to deter the rioting mobs who were reacting to the brief detention of PAAS convenor, 22-year old Hardik Patel, the leader of the 56-day-long Patidar agitation across Gujarat.

Ahmedabad Commissioner of Police Shivanand Jha said curfew will continue in areas under the jurisdiction of nine police stations even on Wednesday night.

“We are keeping a close watch on the situation and all measures are being taken to prevent any further untoward incident,” Jha told media persons.

In view of the tense situation, all schools and colleges shall remain closed for the second consecutive day on Thursday in Ahmedabad and other cities.

Late on Tuesday night, Patel was detained and taken into custody by police after he launched a sudden hunger strike on the stage at the meeting venue.

Adopting an aggressive stance, Patel had earlier served a 48-hour ultimate to the state government to concede to the PAAS demands, following which the agitation would be intensified.

Released after two hours, Patel on Tuesday had appealed for peace and restraint to his followers. He also announced a state-wide shutdown on Wednesday to prevent further escalation of the situation.

However, violence continued to spread during the night in which the homes of at least two cabinet ministers were attacked. Stone-pelting, clashes, torching of a police outpost near Ahmedabad, and arson to public and private buses were also reported.

As per a tentative count, more than 100 buses, including several state and private buses, private cars and motorcycles were damaged in many cities.

She spoke with union Home Minister Rajnath Singh and announced a probe into the incident with a promise to punish those found guilty.

On Tuesday, the PAAS organised a mammoth rally virtually swamping Ahmedabad, with over 1.2 million Patidars seeking reservation in education and jobs.

The ‘maha-revolution rally’, as the PAAS termed it, capped a 55-day agitation across the state with scores of mini-rallies in many towns and cities.

Old agricultural pumps to be replaced in Punjab