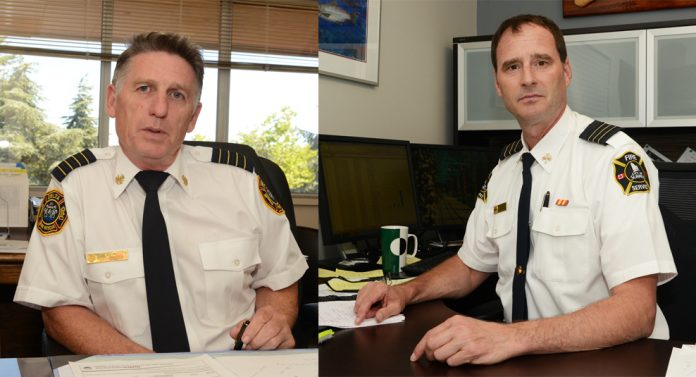 The cities of Surrey and Delta have substantial bush and forest green spaces which are quickly becoming very dry and with the extreme heat, highly vulnerable to fire. The pride of Surrey is the Green Timbers and Campbell River Parks as are the Watershed Park and Burns Bog in Delta. The prime function of the two fire officers is to do everything to prevent anything from occurring and in the event of a fire, suppress it as quickly as possible. To do this, they also require a great deal of cooperation from the public, foremost among them the smokers in our society, who need to be highly attentive to the disposal of their smoking materials.

“Since May first, we’ve had 260 brush fires in the city,” says Steve Robinson of the Surrey Fire Service. “That was twice the number than we usually have for the month, and 27 of those fires took more than 500 litres of water to put out. A lot of fires we get called to are in the traffic medians where there is bark mulch or some other kind of dry material, and most caused by discarded cigarette butts. People have to be careful.”

Robinson said that the City of Surrey is in an elevated risk for fire hazard, and across the lower mainland it is very high. “When you see the grass dry and brown, understand that everything is very very dry so people operating equipment might need to have a “hot work” permit to ensure that operators have precautions in place to guard against hot equipment causing fires.

Both Chiefs recommended that people check the perimeters of their properties for any material such as branches or other flammable materials, which could be a risk and dispose of them.

If you see smoke, report it by calling 911, and if you are using a cell phone, Robinson suggests that you be aware of where you are so you can accurately report the location of a fire. “We get many calls where someone reports a fire with a vague description of the location and they don’t know exactly where they are,” he said. “We really need an address.”

If you see smoke you can be sure it’s not legal burning. A ban on open burning has been in place since June 1, which even includes charcoal briquettes in city public spaces like parks and beaches. You can use the briquettes on your property but you can’t have a camp fire, a chiminea or any wood burning outside fireplace.

Assistant Chief Ken Sim of Delta said that one of the major concerns is an interface fire where bush or forest can burn into areas of habitation. He said that all Delta firefighters have the S100 Wildfire training as well as specialized equipment to deal with such problems as the fire in the bog a number of years ago. He said the fire risk in Delta is currently high, but with the extreme heat predicted, it could become extreme easily.

He reiterated the cautions of Chief Robinson, that it is everybody’s responsibility to prevent fires.