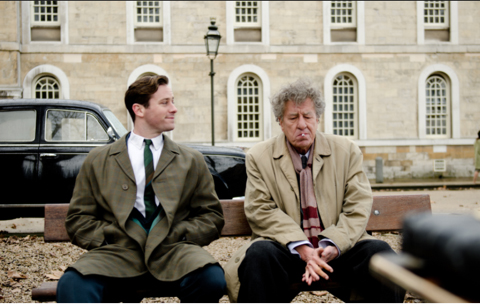 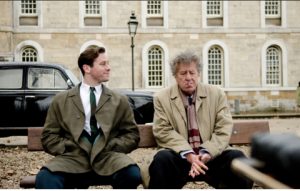 For a moment I was at a loss for the heading of my review of Final Portrait. Should I title my column make-over or Poser. By all accounts this ninety-minute film from Sony Pictures Classics deserves the latter moniker. My oh my how I was glad when the final credits started to roll. Blame it all perhaps on the thirty-minute delay we had until the projector was able to show this drama. Hopefully viewers at The Fifth Avenue Cinemas will have clearer sailing. That incident coloured my mood and experience. To be fair let’s judge the film on its own merits.

Three talented filmmakers are responsible for turning their impressive talents on the rather peculiar life of a rather unwieldy artist. Man, of the moment Geoffrey Rush directs his impressive acting chops inward to immerse himself fully as cantankerous hard to live with painter/sculptor extraordinaire Alberto Giacometti, a Swiss artist of note.  Someone incidentally I never heard of. But I digress for now I have. So too will you,

Along with his brother they work at a humble studio frequented by Alberto’s wife. How often men and women of a genius artistic bent have rather distinct and at times overbearing personalities and presence. Rush shows this man’s warts whole. PoNow his number one subject is a happy go lucky free-spirited New York writer called James Lord. fresh off his dazzling work in the sizzling Call me by Your Name Armie Hammer dials down the emotion as his presence is largely confined to “sitting” for the rather obtuse artist. As you can guess watching all this lack of interaction comes across about as excited as watching paint dry.

Director Stanley Tucci must clearly love this artist as this film is rather downbeat, with not too redeemable characters who truly don’t emit that much emotion. Set in the heady days of springtime/summer of 1964 Final Portrait is one painting that most would find hard to sell.