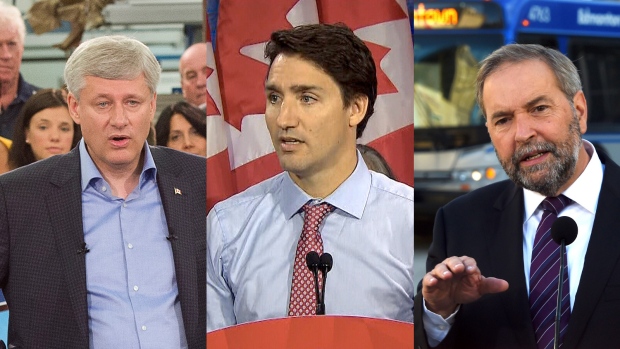 OTTAWA: Stephen Harper’s rivals defended the costs of their campaign promises Wednesday and the Conservatives deflected bad news from global analysts in a spurt of last-minute positioning before a leaders debate on the economy.

A panel of NDP candidates, including former Saskatchewan finance minister Andrew Thomson, released the party’s proposed fiscal plan at an Ottawa news conference, forecasting balanced budgets and surpluses in the years to come.

The party, which has never formed government federally, is trying to combat criticism that it is fundamentally ill equipped to manage the economy, as well as ideologically incapable of being business-friendly.

New Democrats say they will pay for platform items such as a national child-care program and more affordable housing through such measures as the elimination of income-splitting plan for families, cuts to fossil fuel subsidies and raising the corporate income tax rate to 17 per cent from 15 per cent.

Harper has not yet released a full costing of the Conservative party’s proposal fiscal plan, although each platform announcement comes with an individual price tag. The prime minister has been emphasizing Finance Department figures released Monday showing the federal government booked a $1.9-billion surplus for 2014-15 _ a year earlier than projected.

But on Wednesday, the Organization for Economic Co-operation and Development lowered its estimate for Canada’s economic growth this year to 1.1 per cent _ down 0.4 of a percentage point.

The international organization blamed lower prices of natural resources for the slip in projected growth in countries that depend on such exports, such as Canada and Australia. It also downgraded its projections for growth in Canada in 2016.

“We are living in a very fragile global economy which is precisely why we need a serious, grown-up national government that is focused on job creation, fiscal discipline and lower taxes,” said Conservative candidate Jason Kenney, speaking on behalf of Harper.

“We see those reports as underscoring our economic message.”

Harper, NDP Leader Tom Mulcair and Liberal Leader Justin Trudeau all converged on Calgary, where the Globe and Mail-hosted debate is scheduled for Thursday evening.

Trudeau told reporters his promises are all costed within a fiscal framework the party released weeks ago. That framework includes a proposal to run deficits for the next three years, in order to pay for a $60 billion infrastructure spending plan, but is short on specifics about the costs of various other promises.

“The Liberal party was the first party to put out a complete fiscal framework and our opponents know that very well, they’ve been attacking us every single day,” said Trudeau.

“All of our commitments, every commitment we make and every announcement across this campaign, is not only fully costed, but fits into that detailed framework that we announced weeks ago, before any other party did.”

Issues breaking outside of the economic ambit crept into the campaign dialogue.

A Federal Court of Appeal decision on Tuesday overruling the Conservative government’s attempts to ban face coverings at citizenship ceremonies provided yet another opportunity for the parties to stake out their value positions.

Immigration Minister Chris Alexander announced the decision would be appealed to the Supreme Court of Canada. The government has 60 days to formally ask for leave to appeal.

“This is a secular ceremony,” said Kenney, the longtime minister of multiculturalism, now defence minister.

“We find it completely inappropriate to hide one’s identity.”

“In Canada, we protect minority rights. That’s one of the things that makes us an extraordinary country, strong not in spite of our differences, because of them,” he said.

“In any situation where a government chooses to limit or restrict individual rights or freedoms, it has to clearly explain why. This government has not done that, it is continuing with the politics of division and even fear, and that is not worthy of a country as diverse and extraordinary as Canada.”

The Liberals and NDP see his success and that of Premier Rachel Notley as inspirational.