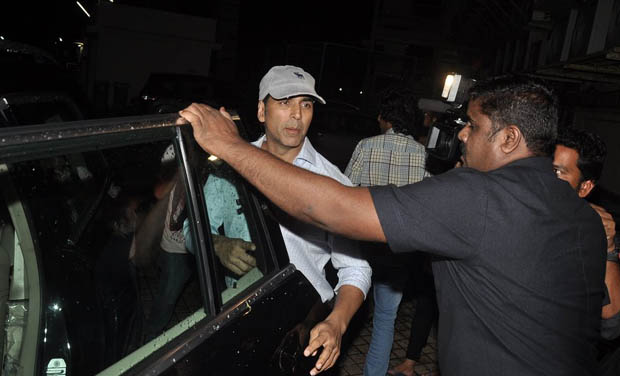 Mumbai: Superstar Akshay Kumar, whose bodyguard recently punched a fan, said that while it was wrong to raise hand on someone, it was important to pay attention to the fans’ strange behaviour sometimes.

“I agree that raising hand on someone is wrong, but you have to pay attention to them (fans), and they (bodyguards) have been seeing those things,” said Akshay when asked about the incident at the launch of song “Taang Uthaake” from film “Housefull 3”.

Akshay’s bodyguard was caught on camera punching a young man, who was trying to click a selfie with the superstar. Akshay subsequently apologized to the fan on his Facebook profile.

About the strange behaviour of fans, Akshay said: “Around 2-3 years ago, I was shaking hands with numerous people and suddenly I found that my hand was bleeding; and there was blood everywhere. And then I realized that someone had kept a blade between their nails, and my hand was cut while shaking hands.

“You call it madness, or stupidity or ‘fanpana’… you need to take care of these things. Actors could get hurt. I have seen lot of wrong things happening with heroines. They (bodyguards) are there just to take care of it… (but) yes hitting someone was wrong and that I’ll make sure it doesn’t happen again.”

Akshay’s “Housefull 3” is gearing up for release on June 3.

‘I Am Mr. Mother’ worth watching: Tara Alisha