Surrey: “We’ve succeeded in admitting 25,000 of 29,000 Syrian refugees,” said John McCallum, Minister of Immigration, Refugees and Citizenship during a media briefing in Surrey this week. “Virtually all have permanent housing and we’re now working with them to learn English or French. We restored refugee health care that had been taken away, our Citizenship Act has passed the House of Commons and only needs Senate approval to become law. That legislation restores the principle that there aren’t two classes of Canadians, allowing immigrants to gain citizenship one year sooner. We’ve relaxed the language tests on older people.”

McCallum said he is focused on the things not yet done. Primary among them a campaign promise to substantially reduce the processing time for families, which also requires the backlog be reduced. The Minister said he had made clearing the backlog the number one priority of the department.

“Once we get to a certain point on that, sometime in the fall,” McCallum said, “we’ll be able to announce a new system for family reunification to substantially reduce the processing time for children and spouses.”

In the fall, McCallum said, they will begin consultations across the country, including Surrey, Richmond Vancouver, to hear what the public has to say prior to announcing the government’s immigration target levels for the next three years. They will also be looking for feedback on making the immigration system more efficient. 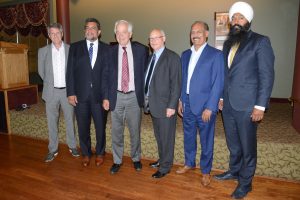 “One of the things we are going to do is give additional points for Express Entry of International Students. I’ve talked to people across the country and I say that of all the groups, one could consider International Students as the most promising potential Canadians. They’re young, they’re educated, they speak English or French, and worth crediting additional points for express entry.”

He said the government plans to streamline the process of Express Entry further.

“Immigration is central to who we are as a country,” said Minister McCallum. “It’s extremely important to have a system that is not only compassionate in terms of admitting refugees, but also equips Canada for our future. We have an aging population and definitely need more immigrants. We want a system that is effective in bringing in what is sometimes called the best and the brightest in competition with other countries like Australia, the US and the United Kingdom. We are working hard to achieve that.”

McCallum also said he was planning to allow extra points for applicants who have siblings already in the country.

“I got the idea from the Seniors Centre right here in Surrey. When somebody applies to be a permanent resident, they get points for education, points for language knowledge and soon they’ll get points if they’re an international student. We want the immigrants to assimilate as quickly as possible, to get jobs, to become regular Canadians, and the more they have a support system here when they arrive, the easier it will be to adapt to Canadian life. I can’t think of anything more supportive for newcomers than close members of their own families. It would not be a guarantee, but it would be a help toward acceptance.”

Our country was built on immigration and so it is important that we do everything we can to improve the system and make it work to build a better future for Canadians.

In response to questions from the media, he touched on a number of other issues:

On the issues concerning Chandigarh: “That is a challenge and a problem and has been for many years. We have sent additional staff there, including the Assistant Deputy Minister of Operations, and we have referred some of the cases to Delhi in order to reduce the processing time. In terms of the refusal rate, we are looking at the issue of fraud and thinking of ways we can take action to deter that, as well as assure that applications are fully complete before being sent for processing.

On the question of Temporary Resident Visas: “It’s partly a result of to large an increase in demand around the world and India specifically, and then there are the specifically Chandigarh-related problems which we are working hard to address.”

McCallum dealt with a large number of questions concerning access by families to emergency visas. He said they will seek better solutions for funerals and other family emergencies but said weddings don’t require urgent or emergency visa applications. He addressed the concern about “anchor babies” where pregnant women arrive as tourists wanting to deliver in Canada to claim Canadian Citizenship for their babies. The minister said the government does not approve of the practice, has no policy on that at the moment but is looking into it.

Responding to a question about improved credentialing, the longstanding frustration faced by most professional and skilled immigrants, McCallum agreed that the problem needs attention, but is complicated as the jurisdiction is split with the provinces. There is much that can be done if the provinces participate.

“At a Federal-Provincial conference of immigration ministers several months ago,” McCallum said, “the minister from Quebec proposed that we have a conference on best practices on credentials. I immediately said yes, and hope that something really positive will come out of this Best Practices conference that we’re going to hold some time in 2017.”

PM announces the appointment of Suzanne Côté to the Supreme Court...