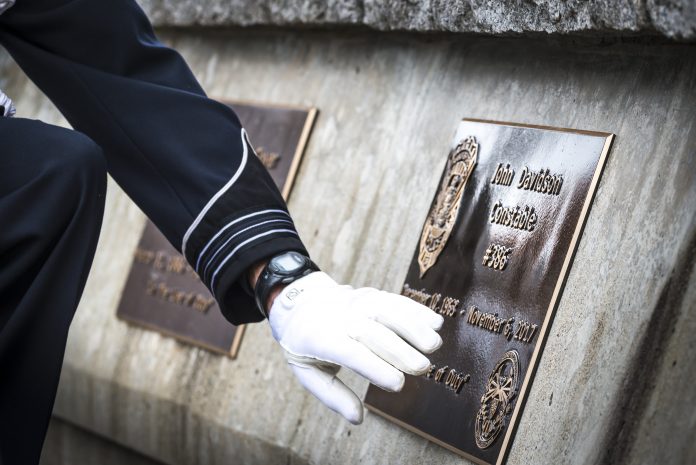 Abbotsford:  A plaque has been unveiled by police in Abbotsford, in honour of a constable who was shot to death in the line of duty a year ago.

Const. John Davidson’s colleagues held a private service Tuesday to remember him and added the plaque to the Wall of Heroes at a square outside their department, where the plaque of another officer is also placed.

Davidson was killed when he and other officers confronted a suspect after receiving a call about a stolen truck.

Chief Const. Mike Serr told the service 53-year-old Davidson made the ultimate sacrifice protecting the community but no one should walk past the plaque with sadness.

Davidson had a strong impact on the people he served, especially youth, Serr said in his written speech, provided by the department.

He said one email Davidson’s family received after his death showed how much he cared.

It was from a man who shared that when he got into some trouble as a teenager, Davidson showed up at his high school and supported him when every other adult including his parents and principal turned their backs on him.

“Davidson being Davidson simply told me, ‘Hey man, look. I don’t want to get you into more trouble than you already are but you need to tell me what happened.’ That’s exactly what I did.”

“I will never forget that day in my life,” the man said in the email.

Serr also noted the words of a local high school principal, who said Davidson knew how to connect with people.

“He never talked down to students. Rather, he provided no-nonsense advice and always extended a sincere and genuine respect and understanding of the challenges youth face.”

Davidson was remembered for being a member of Cops for Cancer the year he died, riding his bike to raise money for childhood cancer and supporting families.

He was an officer for 24 years after starting his career in the United Kingdom and had spent 11 years with the Abbotsford Police Department, east of Vancouver.

An Alberta man charged with first-degree murder is expected to go to trial in January.