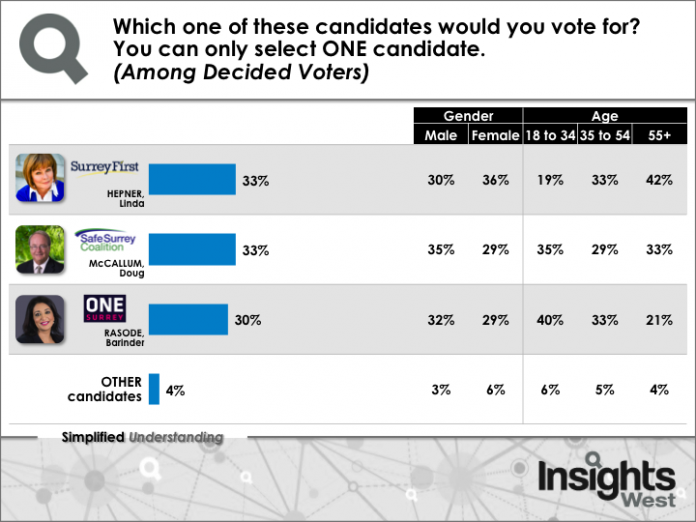 McCallum ahead on economic management, Hepner leads on arts and the environment, and Rasode is regarded as the best person to handle crime.

Vancouver: A latest survey by InsightsWest says that the race to replace Dianne Watts as the Mayor of Surrey is exceptionally close with less than a week remaining before election day, a new Insights West poll has found.

The online survey, by Insights West, of a representative sample of City of Surrey residents found that crime continues to be the most important issue for a majority of residents (54%), with transportation (16%) a distant second. Mayor Watts leaves office with an approval rating of 73%, with only one-in-five residents (20%) disapproving of her performance.

Half of Surrey residents (49%) say they have a positive opinion of mayoral candidate Linda Hepner of Surrey First, while 41% feel the same way about both Safe Surrey Coalition candidate Doug McCallum and One Surrey contender Barinder Rasode.

One-in-five Surrey residents (21%) say their opinion of Rasode has improved over the past month, for a momentum score of +8. In this category, Hepner stands at +1 and McCallum at -9.

Across the City of Surrey, 58% of residents are following the electoral campaign “very closely” or “moderately closely”—including two thirds of those aged 55+ (66%).

A quarter of Surrey voters (24%) are still undecided on which candidate to support in the mayoral election. Among those who have settled on a choice, Linda Hepner and Doug McCallum are tied with 33% each, followed closely by Barinder Rasode (30%).

Hepner’s support is particularly strong among Surrey voters aged 55 and over (42%), while Rasode is connecting well with those aged 18-to-34 (40%). McCallum’s support is stable across the three age demographics.

Most decided voters who are supporting Hepner and McCallum are certain of their choice (69% for Hepner, and 65% for McCallum). However, 54% of Rasode’s decided voters say they could change their mind before election day.

Among the three frontrunners, Hepner is regarded as the best person to handle arts and culture (24%), parks and recreation (21%), poverty (19%), the environment (also 19%). She is practically tied with Rasode on housing (19% to 18%). McCallum is the top choice on economic development (25%) and city finances and taxation (also 25%), and is almost even with Hepner on transportation (22% to 21%).

“Any one of these three candidates can win this election, particularly with so many voters still making up their minds,” says Mario Canseco, Vice President, Public Affairs, at Insights West. “All three have created lasting impressions on voters. McCallum is now seen as a superior economic manager, Rasode is gaining traction with her position on crime, and Hepner continues to represent a sound option for the status-quo on services.”

Insights West is a progressive, Western-based, full-service marketing research company. It exists to serve the market with insights-driven research solutions and interpretive analysis through leading-edge tools, normative databases, and senior-level expertise across a broad range of public and private sector organizations. Insights West is based in Vancouver and Calgary and has seventeen employees.

Results are based on an online study conducted from November 6 to November 8, 2014, among 510 City of Surrey residents aged 18+ who are Your Insights panel members. YourInsights.ca is Insights West’s in-house access panel offering on-demand samples for both clients and research suppliers looking for Western Canadian populations. The data has been statistically weighted according to Canadian census figures for Surrey for age, gender and region. Results have a margin of error of +/- 4.5 percentage points, 19 times out of 20. Click here to view the detailed data tabulations for this study.