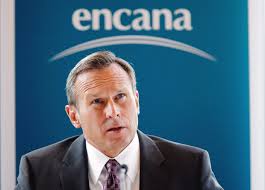 By Ian Bickis, THE CANADIAN PRESS

CALGARY: The head of Encana offered a blunt take on the accumulating layoffs in the oil and gas sector as the Calgary-based energy giant announced plans Wednesday to cut its workforce by 20 percent this year.

“The job reductions not only at Encana but across the industry have been as severe as I’ve ever seen in 33 years,” CEO Doug Suttles said in a conference call with investors after the company released its fourth quarter results.

Last year, as oil prices took a nosedive, the company laid off 19 percent of its workers. It began 2015 with 3,129 employees, meaning it ended the year with about 2,500 staff.

Encana did not say how many jobs would be affected by the latest round of layoffs. But based on last year’s figures, it’s expected another 500 people would lose their jobs this year.

“This will bring us to about 55 percent reduction from just over two years ago,” Suttles said.

“In my experience, that’s incredible.”

He said the company is trying to use creative means of keeping staff on, deploying some employees into contractor and service provider roles while offering sabbaticals to others in the hopes of bringing them back once crude prices recover.

“People have empathy,” Suttles said. “These are real people with lives and families.”

The grim news came as the oil and gas producer, which reports in U.S. dollars, said it had a $612 million net loss or 72 cents per share in the fourth quarter, mostly the result of asset writedowns and other non-operating items.

Those were partly offset by a 36 percent increase in Encana’s liquids production since the fourth quarter of 2014 and previous cost-cutting measures that helped boost Encana’s cash flow despite lower commodity prices.

Excluding $514 million in asset impairments and other items such as foreign exchange, Encana’s operating earnings were $111 million or 13 cents per share, up from $35 million or five cents per share a year earlier.

Capital spending will decline by 55 percent this year to between $900 million and $1 billion, and the company aims to reduce its cost structure by $550 million, Encana said.